A local resident says that she was incorrectly classified as a positive COVID-19 case but the Department of Public Health and Social Services refused to listen.

On Tuesday, the Guam Department of Education announced that a student at George Washington High School and an employee at John F. Kennedy High School tested positive for COVID-19.

The JFK employee, however, said that was a mistake.

She said she received a positive result after being tested by the Abbot rapid COVID test.

However, a subsequent PCR test came back negative.

PCR tests are considered the gold standard for COVID testing.

The JFK employee, whose name is Shaunna Camacho, told Newstalk K57’s Patti Arroyo Wednesday morning that she tried to explain the situation to Public Health.

She said that the employee she spoke with was not helpful.

“I had someone call me yesterday, and I even I told her, ‘Ma’am, my PCR was negative.’ And she said, “Ok, can I get the name of your household members? Who lives with you, because they’re probably COVID positive as well. And so I told her, ‘Isn’t it possible that the rapid test was a false positive?’ And she agreed. She said, ‘Yes, it could’ve been, but in your case it’s positive.’ So we need to get the name of your household members and you have to isolate,” Camacho said.

Camacho said she turned to her doctor, Dr. Thomas Shieh, for advice.

Dr. Shieh advised her to take another PCR test just to be safe.

That test came back negative as well.

Shieh said that he contacted Public Health and sent a letter to GDOE superintendent Jon Fernandez to address the situation.

“The solution here is first, you have to reassure JKF, that they don’t have an employee that tested positive. Because she’s confirmed through PCR two times that she’s negative. She’s asymptomatic. Shaunna has a right to return to work. She has a right to her freedom. I contacted, also, the public defender’s office, to have them get involved with this because she cannot be harassed at Public Health. Public Health has exercised so much power over this past year over people. That needs to stop,” Shieh said.

For her part, Camacho said that she just wants to be able to return to work and for Public Health to reassure parents, coworkers, and students at JFK that she’s not a COVID threat.

“I want them to kind of address the public and tell them that it was false. Because they can clear me. And that’s great. But I want them to assure the parents of JFK because they’ve had to call all the students that were in my class, to tell them, ‘Hey, there was … of course they didn’t release my name … they had to say that their child was in contact with someone who was COVID positive.’ And I’m sure those parents were freaking out. I want them to call them and let them know that it was a false positive and we’re sorry for the alarm,” Camacho said.

Guam Public Health spokesperson Janela Carrera said that she can’t go into detail in the interests of protecting patient information but Public Health is aware of the issue and it’s being addressed. 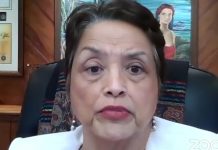 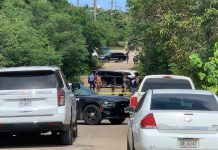