Guam – Over 100 family members of Soldiers from the 1st Battalion, 294th Infantry Regiment received updates about their Soldiers during a townhall meeting last night at the Guam National Guard Barrigada Readiness Center.

Battalion Executive Officer MAJ Joseph Cruz spoke to the families, from the unit headquarters in Camp Eggers, through an internet connection and updated them on how Soldiers were doing and the milestones reached by the units in conducting their missions.

[MAJ Esther Aguigui, Casualty Branch officer in charge, talks about casualty assistance services that are available for deployed Guard members, during a townhall meeting last night for family members of deployed Soldiers of the 1-294th IN RGT.]

Families also learned about other services and resources available to them, including casualty assistance and a psychological health program. GUNG State Chaplain Richard Kelly also conducted a briefing on marriage improvement and communication skills.

Close to 600 Soldiers from the battalion are deployed to Afghanistan. The unit is operating as Task Force Guam, under the NATO Training Mission – Afghanistan, International Security Assistance Force.  This deployment is considered to be the largest reserve component mobilization and deployment from Guam. 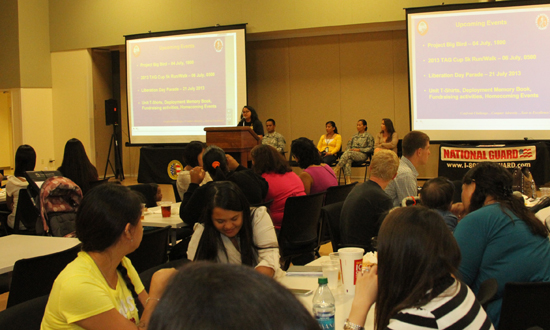