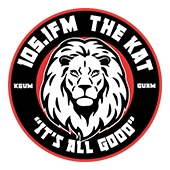 Guam – You may have heard but if you haven’t, be sure to turn that dial to 105 The Kat as Sorensen’s own has a new sound, and a new look.

Pauly X in the morning,  Bronson in the middays and Leo in the afternoon. This is the new lineup for the brand new 105 The Kat which just a little bit ago, switched to hot adult contemporary which according to Pauly X is a mix of hot 100 tracks from the 80’s 90’s and into the millennium and as the new slogan reads, “its all good.”

“Thats our new slogan, ‘it’s all good’ and they’ll see they’ll be listening and they’ll be like ‘yeah you are right’…you got music from the 80s until almost now so that’s a big gap most people are trying to fit it in within those last ten years or even the newest music. We have a vast playlist of almost all-great music its all good from the beginning to end, its all good,” says Bronson on what the new Kat will bring listeners.

Pauly X in the morning explains that the new 105.1 Kat will play music that will help bridge age gaps.

“Imagine yourself in the car with your kids in the back and a Justin Timberlake song comes on. Your kids know who that dude is, he plays in a lot of movies, He’s got a lot of hot tracks, he colabs with a lot of the newer singers, and you’re like what you know about this song? And the kids like what are you talking about mommy? What you talking about daddy? Ohhh you don’t know about Justin Timberlake and you start to really get to know, not only our music, but the kids also appreciate the kind of music that you went through.”

The new Kat will also feature acoustic songs we all remember to new acoustic covers that are hot on Guam right now.

“We sprinkle some very hot covers, acoustic tracks, that may have been lost here and there. Nirvana’s acoustic unplugged stuff. Those have charted and then were going to grab some guys like Boyce Avenue that do some very good top 40,” says Pauly X on the new transition.

According to both radio personalities, the Kat promises to tap a market on Guam that has been desperate for continuous hot adult contemporary music. He also says the newest superstar of the Kat is simple…the music.

“And our superstar of the Kat is the music. You’re going to hear more music than probably anyone else out there, I can definitely attest to that we throw in more music throughout the day,” says Pauly X.