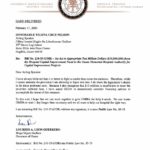 The measure proposes appropriating $10 million from the Hospital Capital Improvement Fund to the Guam Memorial Hospital Authority for the purpose of funding three critical capital improvement projects which are:

1. The repair or replacement of the electrical panel and necessary generator;

2. The repair of the leaky roof; and

3. The procurement of an electronic health records system.

In her message to the Legislature acknowledging that she would allow the bill to become law, the governor made it clear that she “cannot execute the provision.”

She did not say why in her letter but she has made it clear in the past that there are no funds available.

The $10 million is far from enough to accomplish all three goals. The health records system has been projected to cost well over $20 million. It is one of the principal deficiencies cited by the Centers for Medicare and Medicaid Services which has threatened GMH with the loss of its CMS certification.

However, the governor wrote that she has always believed that “it is better to light a candle than curse the dark.”

“Because I recognize that $10 million is insufficient to meet the priorities outlined here, I have asked (the Guam Economic Development Authority) to immediately consider financing options to accomplish the intent of this measure,” the governor stated.