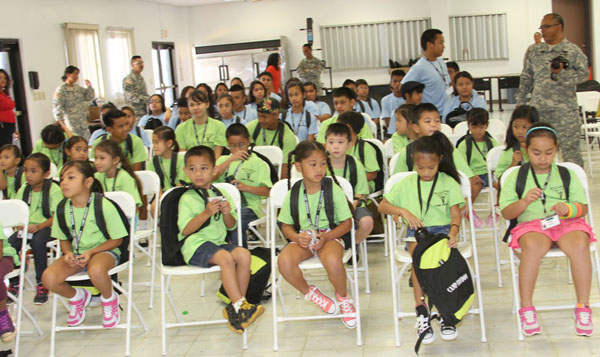 Guam – The 10th Annual Camp Freedom opened Monday for children of Guam National Guard Airmen and Soldiers at Fort Juan Muna in Harmon.
The Guam National Guard Counterdrug Program, together with the Family Programs Office, conducts the annual camp to bring kids together who shared the tough experience of having their parents deploy and allows children to interact and network with one another.  The camp provides an interactive learning environment full of team building activities and experiences that help develop fellowship among dependents.
Priority for Camp Freedom is for children of Guam Guard Soldiers and Airmen, ages 5 to 17, who recently returned from deployment.  Nearly 600 Soldiers from Task Force Guam, Thirty-one Airmen of the 254th Security Forces Squadron, and Four Soldiers from the 1990th Contingency Response Team recently returned from deployments to various parts of Southwest Asia.
“The primary focus of Camp Freedom is to help build and foster the children’s resiliency, self-esteem and team building ability in a fun and friendly environment,” said Maj. Gen. Benny M. Paulino, The Adjutant General of the Guam National Guard.
The first Camp Freedom was held in 2005. That year, the Guam Guard continued to see a high deployment rate among its Soldiers and Airmen. Dependents, especially children, were faced with the hardship of having a parent deployed to the combat theater.
Camp Freedom consists of two 1-week sessions, on 14-18 July and 22-26 July, with about 100 kids at each session.   Activities for the children include various team building events, a puppet show, movie and ice cream day at a local theatre, sports, Underwater World tour, kite flying at the War in the Pacific Park, a park cleanup at Asan Public Beach, and a fun day at Onward Water Park.