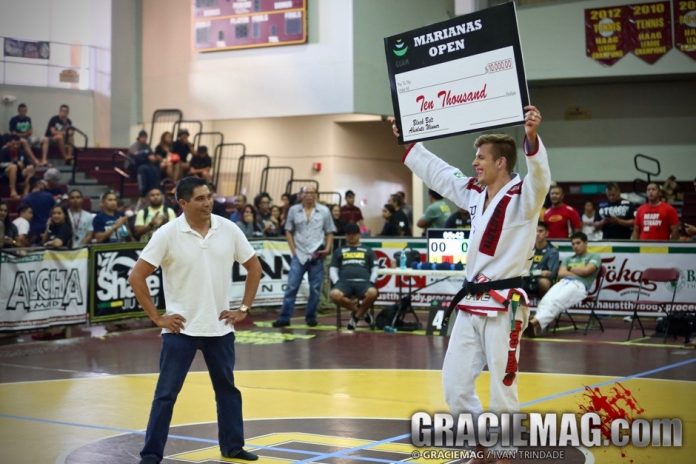 “The list continues to grow and with the biggest names in the BJJ circuit making their way to our beautiful island hungry for the $15,000 total cash prize giveaway,”

HAGATNA, GUAM – Steve Shimizu, founder of the Marianas Open and Copa de Marianas, presents another big money black belt challenge for Guam’s largest and longest running Brazilian Jiu-Jitsu tournament.  The Marianas Open, in existence since 2007, is Guam’s premier BJJ Tournament providing an opportunity for our local athletes to participate against the best from all over the world.

“The list continues to grow and with the biggest names in the BJJ circuit making their way to our beautiful island hungry for the $15,000 total cash prize giveaway,”  says Shimizu. “We want to encourage local black belt competitors to register to compete to showcase their hard-work and talents in this world-class event.”

The Open is proud to announce that this year they will be streaming live on pay-per-view by Budo Videos. Budo Videos is known throughout the world as the largest source for Martial Arts equipment, clothing, training videos and Live Streams of world-class Jiu-Jitsu and grappling events.  The 12 p.m. start of the Black Belt Absolute Championship coincides with prime-time viewership in the United States.

Another special addition is that this year’s Brown Belt Absolute Champion will win airfare, hotel accommodations, and registration entrance fee into the Pan Asia BJJ Tourney in the Philippines in May.

The Marianas Open has seen tremendous growth in the sport throughout the years. The kids’ gi tournament and adult White Belt through Purple Belt will all have the usual weight classes and the respective color belt absolute tourneys.

The 10th year of the Marianas Open will take place Saturday, April 16, 2016 at the Father Duenas Phoenix Center in Mangilao with doors opening at 8 a.m. Kids’ matches and Adult White Belt matches will start promptly at 8:30am and the Black Belt Tournament will start at 12 p.m. Following the Black Belts will be the Brown Belt, Purple Belt, and Blue Belt divisions. Tickets can be purchased at the door. Secure your virtual seat online at www.BudoVideos.com.