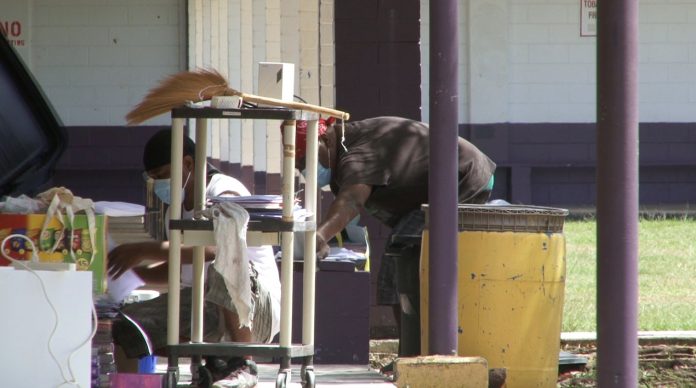 Since 2010,GW is the most vandalized school on Guam.

Guam –  Guam’s most vandalized school has been struck again.

Assistant Principle Dr. Darlene Roberto discovered the crime around 10 a.m.. According to Roberto, surveillance video confirmed that the vandalism occurred around 4:50 a.m. While school principle Lynda Hernandez-Avilla could not confirm whether the vandals were students, however she says they were familiar with the area, as well as the location of the security cameras, some of which were disconnected from the office ceiling. She also says the vandals used instruments to break open the doors into the offices and they wore masks to conceal their identities. Hernandez-Avilla says that in four classrooms, vandals discharged fire extinguishers, covering the desk and floors in chemicals. She also says two of the rooms were flooded as vandals left the sinks running. Guam Police Department PIO Officer A.J. Ballajadia says the case has been forwarded to criminal investigations.

“GW is just like a grand central station, we open our school to the community to use our field, we have ongoing interscholastic sports using our facility and once we shut down, we are right in the middle of housing area so anything can happen,” said Hernandez Avilla. “I know that in the past we had foot security and that only took maybe a year or so until they fond out that something was happening within the security companies that they were also breaking into the schools, so thats unfortunate, we hope that with the contract given by g4s, the assessment will start April 1 and they will have 60 days to make sure they have camera installed, at least at GW.”

Guam Cleaning Masters have been contracted out to clean the classrooms. She says they plan to move the classes that were affected into other rooms such as the library or cafeteria.