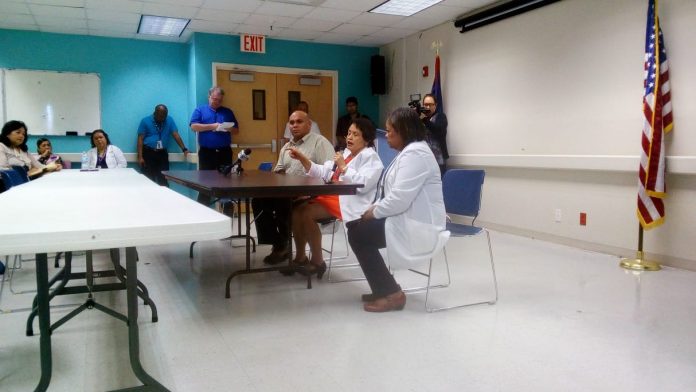 Guam – The island’s only public hospital should not need to wait for a dedicated funding source, says Guam’s Maga’haga Lou Leon Guerrero. Donning her many hats as a registered nurse, a career banker and now the governor of Guam, she proposed various options to address the shortfalls at the Guam Memorial Hospital.

“We don’t really need to wait for a dedicated funding source to fund the hospital. My Contention has always been, if the hospital needs 30 million dollars from the government to make sure that our patients and our people are given the quality of healthcare, then we need to give the 30 million,” says the governor before healthcare professionals of GMH during her executive tour of the hospital.

In line with the administration’s transition platform of providing “Affordable, accessible and available” healthcare, several option were put on the table, but first things first…

“The hospital is just as responsible to be fiscally responsible,” says Governor Leon Guerrero, adding “And also it is our responsibility to, as a hospital, that we are efficient in our processes and we are cutting back waste because as we cut waste back, we cut costs down.”

Where would GovGuam get the money? Uncollected Taxes, as reiterated by the governor.

As a common theme during her campaign, ensuring unpaid taxes are collected as well as improving the tax collection process is an option she presented, highlighting the joint effort recently launched by the Office of the Attorney General.

With the OAG’s commitment to aiding the Department of Revenue and Taxation GovGuam may soon realize revenue owed to them, a portion of which will be allocated the GMH.

Revenue can also be found in the updated rebasing rate of discharged patients at GMH, which after 20 years has been approved, now entitling the hospital to roughly $8.3 million dollars for fiscal years 2014 through 2017. This will continue to increase annually.

In addition, conversation over whether or not government leaders of Compact Impact Migrants would be able to fork up healthcare expenses of their citizens that have relocated to Guam as well as whether Guam could honor their outside insurance coverage or be able to charge them a fixed price monthly to provide such services were also had with the FSM Counsolate’s Consul General Teresa Felipin.

“The reimbursement for the outpatient services are much higher. Where GMH is at now, in terms of the outpatient-inpatient services ratio is where US hospitals were in the 90s. So we are really way behind and we need to look at improving and expanding and offering services, because that’s where we can maximize our revenue,” says Manglona.

However, hospital funding was not the only matter discussed among healthcare professionals of GMH and the administration. A breath of optimism was highlighted by Lieutenant Governor Josh Tenorio, through his announcement of weekly meetings had between Adelup, GMHA, DISID and the Behavioral Health and Wellness Department. In addition, change is coming according to the governor, in regards to the procurement process threshold in order to expedite the procurement of medical supplies by raising the cap from $15,000 to $250,000.