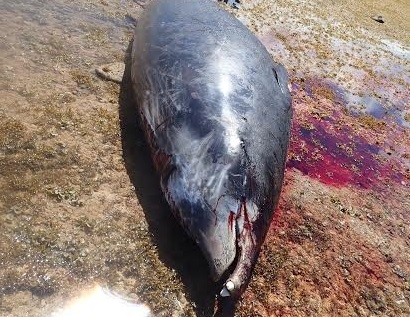 Another beaked whale washed up on the Southern part of the island…this time, a 16-footer.
Guam Department of Agriculture Fisheries Biologist Brent Tibbatts says the whale was found beached at the Agat Marina yesterday morning. Tibbatts says, “It was first reported Sunday morning, just washed up north of the channel of Agat Marina. Overnight, the waves have moved it to the south side of the channel.”
Earlier today, Tibbatts and his team were able to examine the mammal and gather tissue samples to send off to a lab in Hawaii for analysis. When the results come back, Tibbatt says, that’s when they’ll figure out the cause of death, what population the whale belongs to, and if the whale had any disease or contaminants.
He says, “While we were out there today, the whale has been scraped on the coral and is bleeding a fair amount.”
Tibbatts says this is the third deceased whale found on island this year, which he says is more than the number of mammals that wash ashore in a typical year.
He says, “We had one in March, same species. We also had one wash up at the end of April, beginning of May, not clear what species it was.”
As for the cause of death for the other two whales, he says they’re still waiting for the results. Tibbatts says, “There’s only one lab that does whale work for all of America so we kind of have to get in line with all the other tissue samples that have been sent out so we have to wait and see when they can get to ours and they’ll send back the information back to us if they find anything.”
Meanwhile, Tibbatts urges residents to stay away from the whale. He says, “Dead whales can transmit disease to people and they are protected from federal and local laws.”
Tibbatts advises residents to call Department of Agriculture at 735-3955 or 56 if they spot any mammal strandings or sightings.