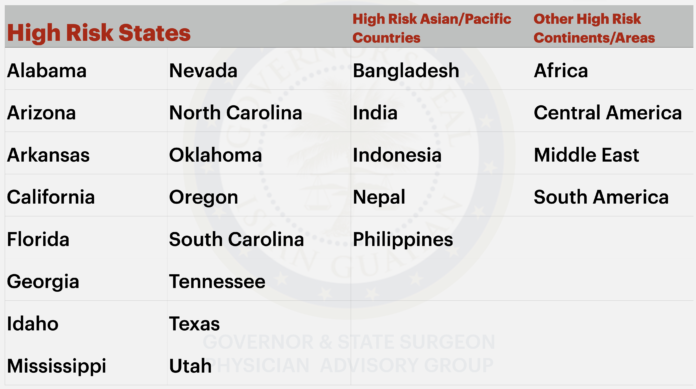 Although the Governor says it was expected that more cases would be reported with an increase in community testing, the test positivity rate has jumped above the point of concern for Adelup which prompted the Governor and her advisory team to make several sweeping decisions, one of which is updated rules around quarantining for travelers.

Firstly, instead of being called hotspots, Adelup is now referring to areas of concern as “high-risk” and there are 16 U.S. states that are part of that list in addition to the Philippines. This is new since the entire continental United States previously was not considered high-risk. 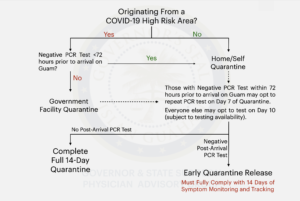 Dr. Felix Cabrera, a member of the governor’s Physicians Advisory Group, said: “So if you start out by asking, are you originating from a COVID-19 high-risk area. If you are not, you automatically go into home/self-quarantine. If you are coming from a high-risk area, then the question is do you have a negative PCR test less than 72 hours prior to arrival on Guam. And if the answer is yes, you do have a negative test, then you can proceed to home/self-quarantine. If you don’t have that, then you will be quarantined in a government facility.”

The bottom line is anyone coming back to Guam will have to quarantine, whether a resident of Guam or not, it’s just a question of whether it’s home quarantine or quarantine at a GovGuam hotel.

And here’s something new, the administration says anyone who had a negative test result coming into Guam can choose to get re-tested 7 days into their quarantine and if they’re negative again, they’ll be released early.

If you do not have a test before you come in, you can ask to be tested 10 days into your quarantine and then again be released early with a negative result.

“But you still must fully comply with the 14 days of symptom-monitoring and tracking. So that is key, just because you get out on Day 7 doesn’t mean you’re done completely, you still have to comply with this program,” Cabrera said.

If you opt not to get tested at all, you’ll have to complete the entire 14-day quarantine.

The new policies go into effect at midnight Wednesday, July 1st, which was going to be the date Guam reopens for tourism. However, that’s been postponed indefinitely also because of the spike in COVID-19 cases.

The Governor says she’s not rolling back any of the restrictions that have already been lifted. However, they’re also not easing any more restrictions for the time being.

As for the COVID-positive cluster of airmen, the Governor again reiterated what Public Health said last week — that there is no obvious link between the airmen and any new civilian cases of COVID on the island.

“They were quarantined at the Guam Reef Hotel and there is a wing there, just for those individuals. And those individuals do not make any contact with any of the employees for the 14 days that they’re there. Once they’re released from that quarantine, then they can go to the main hotel and they can stay there because I think they have a contract for that kind of living accommodation while they’re here,” the governor said.

When asked about tensions between Public Health and the military, the Governor said there’s absolutely none and the two have been cooperating well.

In fact, she said the only reason Public Health hasn’t been able to question the airmen directly is because some of them have “lawyered up.”