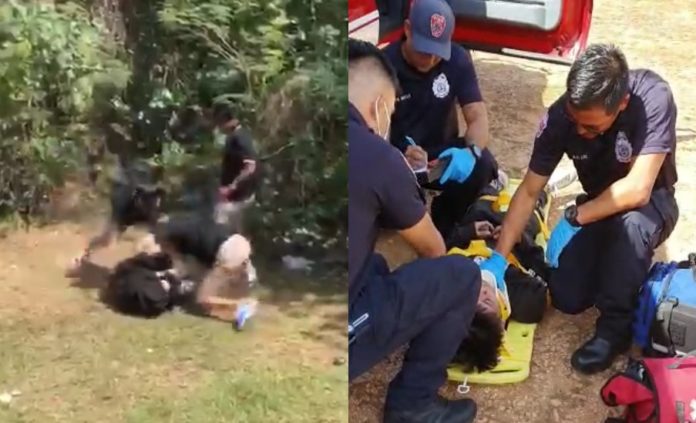 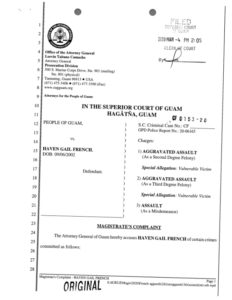 The Guam Attorney General’s office has decided not to file an attempted murder charge against the 17-year-old Tiyan High School student accused in the beating of a classmate at a Dededo bus stop last Friday.

However, they have decided to charge him as an adult.

Haven Gail French is named in a magistrate report filed in Superior Court this afternoon.

Guam police had recommended that he be charged with attempted murder but the Attorney General decided against that, charging him instead with aggravated assault and deciding to charge him as an adult.

The classmate he is accused of assaulting is identified in the court document by the initials R.S., 18 years old.

R.S. was treated and released from Guam Regional Medical City on Friday evening.

According to the complaint, R.S. sustained injuries to his face, head, back, and shoulders, and he suffered a concussion.  He told police he lost consciousness when his classmates beat him.

The magistrate complaint states that French was identified in the viral video as the student who pulled something out of his pocket and struck R.S. with the item, twice.

According to the complaint, French told police that the item he pulled from his pocket was a “small black folding style pocket knife”.  He said he initially “unfolded the blade” but then closed it again.

Then, he said he struck R.S. in the back and one more time on the head, with the knife in a folded position. Then he fled.

French went on to say that he pulled the knife out in the heat of the moment and only used it to hurt R.S. because R.S. had threatened to stab him on the bus ride home.

French and the two other 15-year-old boys charged in the attack are confined at the Department of Youth Affairs. The magistrate complaint states that all three have been expelled from Tiyan High School.