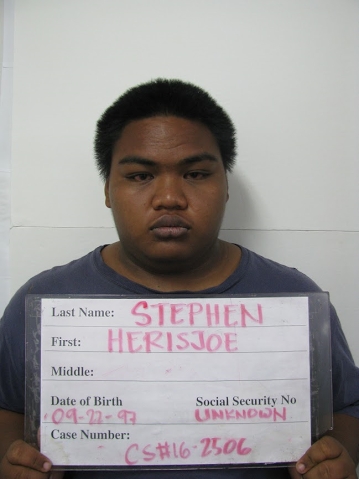 MEDIA RELEASE FROM GPD PIO PAUL TAPAO:“On 1/26/16 at 2:00 p.m., Officers from the Southern Precinct Command arrested a student from Southern High School, HerisJoe Stephen/m/Chuuk/18YOA for the offenses:-Attempted Terroristic Conduct and Crimes Against the CommunityA written note of a bomb threat to occur on 1/27/16 at 9:00 a.m. at the 1000 Building was discovered by Stephen’s teacher and appeared that Stephen made attempts to discard the note.  When confronted by school administrators, Stephen had confessed in writing the note but did not have enough courage to leave the note.  HerisJoe Stephen was later transported to the Guam Detention Facility where he was BOOKED and CONFINED.  HerisJoe Stephen was not responsible for any of the earlier threats made to the school.  The Guam Police Department continues its efforts by taking a zero tolerance stance towards all threats made to our public schools.  Any individual that is found responsible for any threats made to the schools could face confinement in the Department of Youth Affairs or the Department of Correction.”