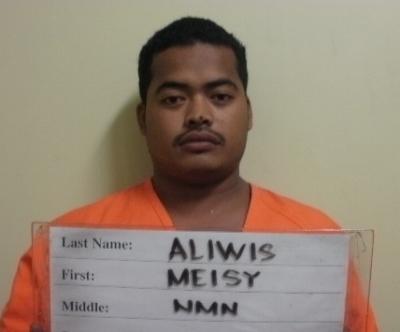 Meisy Aliwis escaped from prison on May 16 but was not reported missing until May 19.

Guam – At least two corrections officers were fired for their involvement in the escape of Meisy Aliwis from prison in May.

The Department of Corrections released the results of its internal affairs investigation today. A total of nine corrections officers who were assigned to Post 5, the unit where Aliwis escaped from, were placed on administrative leave following the escape.

But as of yesterday, DOC terminated two employees, suspended five others for 10 days and cleared one of the officers. Another officer resigned.

After a 24-hour manhunt ended in Aliwis’ capture, the escaped prisoner told police that he had actually left the Mangilao compound three days before corrections officers reported him missing.

Aliwis escaped in the early morning hours of May 16, but wasn’t reported missing until May 19.

A statement to the media read “DOC continues to affirm that any improprieties, professional misconduct or criminal conduct that occurs within the department will be dealt with accordingly and all individuals will be held accountable to the fullest extent of the law.”