Guam – GPD has arrested 2 employees of the Guam Judiciary on allegations that they were engaged in a conspiracy involving the fraudulent use of license plates.

24 year old Vince Cody Taimanglo Guerrero has been booked and confined on for Fraudulent Use of a License Plate and Conspiracy. He is an Administrative Services Assistant at the Superior Court of Guam.

According to a release from Police Spokesman Officer A.J. Balajadia, GPD on Wednesday responded to a report that a court employee was operating a vehicle that had fraudulent license plates. The vehicle was parked at the law library.

Upon investigation, Officer Balajadia reports, police learned that the plates were indeed fraudulent and that the original plates had been confiscated. They also learned that the owner,  Vince Cody Taimanglo Guerrero, had already been cited.

“The owner was informed not to operate the vehicle without properly registering it with proof of insurance,” states Balajadia in his release, “however he obtained fraudulent plates and placed them on his vehicle.”

Guerrero told police that he got the plates from another Court employee who, Officer Balajadia says, was later identified as 25 year old Brian Joseph Taitano Aflague.

Aflague is a Bailiff at Superior Court. He was arrested for Conspiracy and Guilt Established by Complicity. He too was booked and confined. 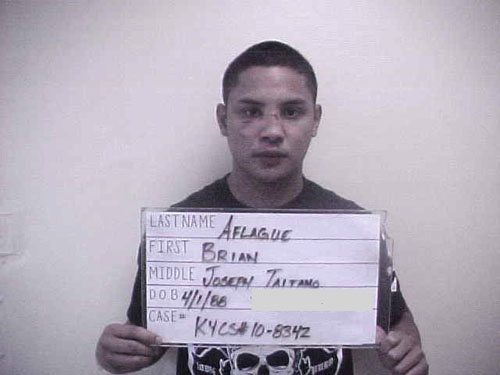 Mr. Guerrero stated that he obtained the plates from another court employee later identified as: