Guam -3 men are dead after a 2 car crash in Yigo on Saturday night.

[1998 Toyota Tercel. 2 men inside the vehicle were later pronounced dead]

It happened about 11:30 pm Saturday at the intersection of Route 1 and Wusstig Road.

A 1998 Toyota Tercel heading south-bound on Route 1 struck a 1996 Toyota Corolla, broadside, as the Corolla was attempting to make a left hand turn onto Wusstig Road from the north-bound lane of Route 1.

The driver and the passenger of the Tercel were both pronounced dead at Guam Memorial Hospital. Guam Police Spokesman Officer A.J. Balajadia said medics attempted to revive the 2 men taken from the Tercel at the scene by performing CPR, but to no avail. One died at 12:17 am and the other was pronounced dead at 12:45 am, said Balajadia.

The man driving the Corolla was initially reported to be in critical condition at GMH. But at 4 am Sunday morning, GMH Nursing Supervisor Shirley Pinera confirmed that he too had died.

Sunday afternoon Nursing Supervisor Bill Toves said the 2 men in the Tercell were cousins. One was 27, and the other man 30 years old. The driver of the Corolla was a 70 year old man who, Toves said, died about 2:30 am Sunday morning.

Autopsies will be performed Monday on all 3. The identities of the victims have not been released. There were no other passengers in either vehicle.

Their deaths mark the 12th, 13th and 14th traffic related fatalities of the year on Guam. One more than the 13 traffic fatalities recorded in all of last year.

A traffic light has been installed at the intersection of Route 1 and Wusstig Road.  But it is not yet operational.

Route 1 north and south of the Wusstig Road intersection is also undergoing construction and both the north and the southbound lanes narrow to just one-lane in each direction through the intersection. Construction barrels, flashing lights and warning signs signal to motorists to slow down, but they also obscure vision of the traffic ahead.

Officer Balajadia declined to speculate whether alcohol was involved in the accident. However beer bottles littered the front seat of the Tercel in which two of the fatalities occurred. 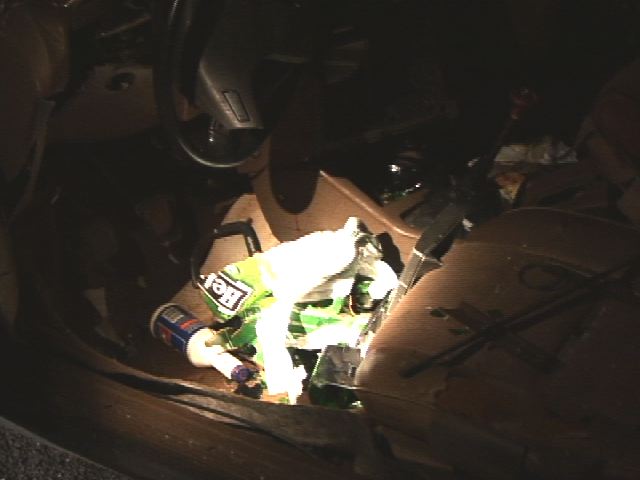 It was a tragic start to the Guam Police Department’s DUI crackdown which began Saturday night. The new policy requires a mandatory stay of at least one night in jail for all persons arrested for DUI in an effort to discourage drunk driving.