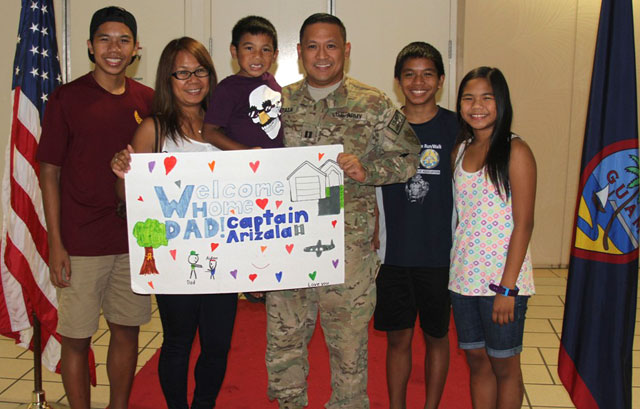 Guam – The island welcomed home 2 Guam Guardsmen Saturday night, one whose deployment has ended, and another who is on leave.

Capt. Arnold Arizala was one of four soldiers from the 1990th Contingency Contracting Team (CCT) who returned to Guam after more than 8-months in Afghanistan, where he served as part of a highly specialized team tasked with handling all contracting actions in the Afghanistan area of operations. 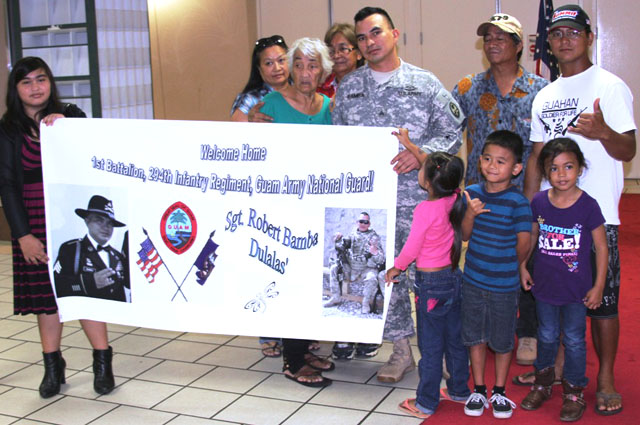 This is the first time SGT Bamba has been home since he left as a member of Task Force Guam’s Delta Company for a 10-month deployment last year.  SGT Bamba is currently receiving medical care for injuries he received while deployed.

Three remaining Soldiers of the 1990th CCT are expected to leave the theater of operations within the next 30 days and return home shortly thereafter.

One Soldier, deployed with the 1990th Contingency Contracting Team (CCT), will be arriving on Guam tonight.

The Soldiers of the highly specialized 1990th CCT played a critical role during the continued drawdown of U.S. forces in Afghanistan.  They were tasked with handling all contracting actions in the Afghanistan area of operations.

The three remaining Soldiers of the 1990 CCT are expected to leave the theatre of operations within the next 30 days and return home shortly thereafter.