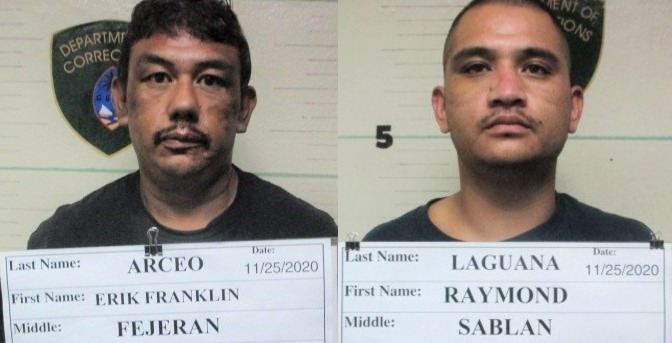 Two men have been arrested on charges related to burglary, theft, and drugs.

Erik Franklin Arceo allegedly pulled up in a Ford Explorer at a residence in Chalan Pago on November 18. The victim says the Arceo identified himself and asked for her nephew. When the victim went to get her nephew, her screen door was closed but upon returning the door was open and her purse was gone along with six hundred dollars.

Later that evening, police responded to a theft complaint at the Harmon Shell gas station involving the same vehicle. The gas station attendant provided a description that matched Arceo, telling officers that he did not pay for the gas.

On November 24, police responded to an attempted theft of a motor vehicle in the parking lot of Alupang Beach Towers in Tamuning. The witness reported seeing the same Ford SUV positioned in the parking lot blocking both ways of travel.

The complaint states that two men were seen attempting to load a motorcycle into the vehicle. Police reported that the men fled when they noticed the witness. The case prompted an all-points bulletin being placed on the SUV.

Later that day, police located the SUV traveling in Sinajana and conducted a traffic stop. Arceo and Raymond Sablan Laguana were inside the vehicle. A woman was also in the car. Her backpack was searched and a small ziploc bag was found containing methamphetamine. The woman told police that the meth belonged to Arceo. A glass pipe with meth residue was found near Laguana. The woman told police that the pipe was used to smoke meth earlier and belonged to Laguana.

Arceo was charged with burglary and theft of property. He was also charged with attempted theft of a motor vehicle and possession of a scheduled two controlled substance along with Laguana.