Preliminary reports suggest that at around 2:38 am, officers conducted a traffic stop on a Nissan Versa at 76 Circle K gas station on 10A.

A search of the vehicle was conducted which yielded the discovery of 5 grams of crystal
methamphetamine and drug paraphernalia.

He was booked and confined at the Department of Corrections.

He was booked and released. This case has been forwarded to the Office of the Attorney General for prosecution. 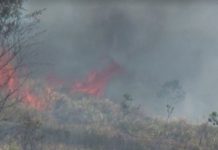