Guam – Two men have been charged with a variety of crimes after leading police on a chase through traffic in Tamuning last Thursday in a car stolen from a priest.

According to the Magistarte’s report, police observed a vehicle traveling at a high rate of speed on Governor Carlos Camacho Street last Thursday at 9:46am.

A GPD patrol car gave chase, but the driver of the vehicle “attempted to elude the patrol car by running a red light at the intersection of Farenholt Avenue and Gov. Carlos Camacho Street. At one point the suspect vehicle stopped, but again accelerated and eluded the police. Finally, the suspect vehicle came to a stop in the oncoming lane of traffic.”

Officers then discovered that the vehicle the suspects were driving had been stolen earlier that same day from Gregory Muckenhaupt, a priest at Society of Jesus. Also stolen from Muckenhaupt was a thumb drive, and a wifi antenna. Police found the priests’ stolen wifi antenna inside the stolen car. The thumb drive was not recovered. They also found  “three opened cans of Bud Ice that were cold to the touch, and partially empty.”

Nakamura was identified as the driver, Frikty was the passenger.

“Nakamura admitted … he and Erikty were drinking Bud Ice while operating the motor vehicle” but he “denied any knowledge of how the vehicle was stolen, and claimed that he was only driving because Erikty was too drunk to drive. He also admitted that he was trying to elude capture when he saw police were pulling him over. Nakamura is currently on pre-trial release for Case number CF1 1-12.” 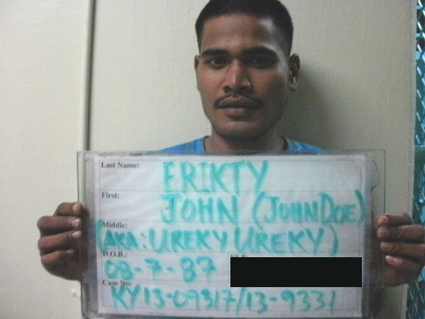