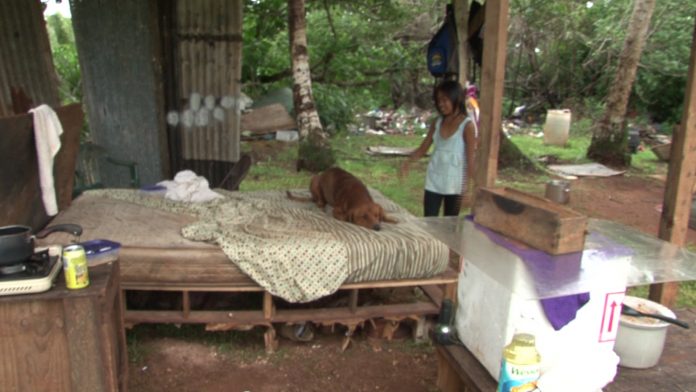 The girls’ father, Billy Fejeran, says he’s doing everything he can to provide for his daughters after the home he was temporarily staying in was destroyed in Typhoon Dolphin.

Guam – PNC was alerted to a family of squatters living in deplorable conditions in Yigo. We visited them today and spoke to the father to find out more about their situation.

Vannalyn Aguero, 8, and her sister, 7-year-old Aurora Aguero are currently living in a torn up shack with barely a roof above their heads. Their father, Billy Fejeran says while it’s not ideal, he’s doing everything he can to provide for his girls. He explains that the structure, made of tin and wood, was destroyed in Typhoon Dolphin.

It’s a situation that some concerned residents alerted us to. A situation that, indeed, some would argue is not place for two young girls. There’s no power, but Fejeran says there is water. We asked him how he felt about their situation.

“I feel bad for my kids. I don’t care about me, but my kids. I got brothers but one’s in the states and one’s in Talofofo. He has a family of his own so you know,” he says. For now, Fejeran says neighbors and some relatives would check on him and his girls and offer assistance, like food and clothes.

He tells us that he has no job, but is doing community service at the Yigo Mayor’s Office and in some sort of exchange gets Food Stamp and welfare benefits.

PNC: “Do you ever think that maybe you can try to put your daughters in a safer structure?”

Fejeran stressed that his neighbors have been helping him with rides and would often check on the girls to ensure that they’re fed. He says it’s just a matter of getting housing assistance for him and his girls.