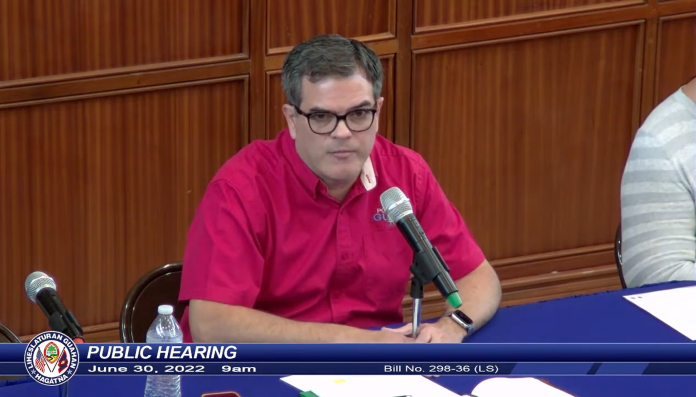 Tensions rose between lawmakers during a public hearing held yesterday, that nearly got 2 Senators removed from the floor.

The Public Hearing was focused on Bill 298-36, which is “relative to the financing or refinancing improvements and capital improvements of the Jose D. Leon Guerrero Commercial Port, and other related facilities and operations of the port, through revenue bond proceeds.”

The exchange stemmed from questions from Brown regarding items such as a lack of bids on bond-funded projects, Hotel Wharf, and Staffing Patterns.

Senator JOANNE BROWN stated, “What is your current Staffing Pattern at the Port Authority?”

RORY RESPICIO, PORT GENERAL MANAGER stated, “We have about 404 employees, it’s still not where we need to be but that’s where we’re at.”

Senator Brown responded with, ” I’d like to also request these positions, at the time the bond was executed we had 356 employees, 121 in administration, and 235 in the yard with specific breakdowns to each division, so you now have 400.”

Respicio stated, “Well, you also left the port with a net negative $104K, we made $7.5M the first year I don’t know where we’re going with this line of question.”

Following the exchange, Senator Torres interjected, arguing that the conversation was going beyond the context of Bill 298.

TELO TAITAGUE, GUAM SENATOR stated, “Just as you ask us to behave decorum, I’m asking the same that you do in your capacity as chair to have Mr. Respicio just answer the questions.”

MARY CAMACHO TORRES, GUAM SENATOR stated, “Mr. Sergeant of Arms may I please ask you to escort these two I think that you have demonstrated an extreme disrespect for the presider.”

A recess was then called, and the public hearing concluded following the last few series of questions from Brown with no heated discussion.