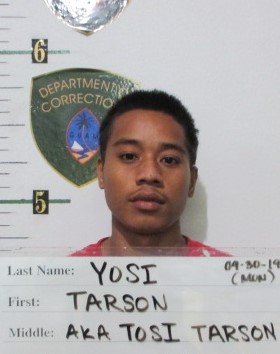 During the course of the investigation, officers learned that Tarson Yosi was identified as the person responsible for damaging several cars within the parking lot of the Tamuning Lodge and had fled prior to police arrival.

Officers also learned that a male victim was struck by a rock thrown by Tarson Yosi
however, the male victim refused any medical treatment.

On Thursday July 29, a follow-up investigation was conducted by TTPC officers and were able to locate Tarson Yosi at an apartment complex in Tamuning. Tarson Yosi was later transported to the Tumon-Tamuning Precinct Command and was later arrested for the following offenses

Tarson Yosi was subsequently booked and confined at the Department of Corrections. This case has been forwarded to the Office of the Attorney General for prosecution.