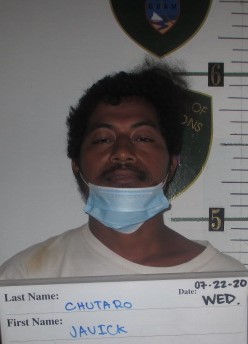 Guam Police say on Wednesday this week, around 4:00pm, officers assigned to the Tumon Precinct Command responded to a home invasion complaint at a home along Tun Jesus Crisostomo St, in Tamuning.

Preliminary police reports suggest that several family members from the residence were home when one of the residents’ discovered an unknown man inside the kitchen area.

The unknown man was then seen walking out of the dining room area and out of the home; he allegedly began pacing back and forth outside.

Police were then immediately notified and were provided with a detailed description of the man based on a photo that was taken by a family member.

A cursory check was conducted by responding officers where a man fitting the description was located by the Tamuning Mayor’s Office. Officers then met with 20-year-old Javick Chutaro and the family was able to positively identify him as the intruder.

As officers were arresting the man, they say he became belligerent and noncompliant towards the officers. A struggle ensued and in the course, Chutaro kicked an officer as he continued to resist.

Officers were eventually able to control him. He’s been arrested and charged with:
-Home invasion
-Burglary
-Terrorizing
-Resisting Arrest
-Assault on a Peace Officer

Javick Chutaro was later booked and confined at the Department of Corrections. This case has been forwarded to the Office of the Attorney General for prosecution.