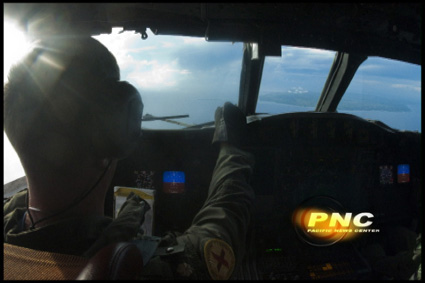 Guam – The U.S. Navy this past week wrapped up its annual  “Island Chiefs” exercise. Its a patrol operation that spans the reaches of the Western Pacific on the look-out for rogue fishing trawlers en-croaching into the economic zones of the island nations in our region.

Flying out of  Guam’s Andersen Air Force Base, the Navy’s VP-9 Patrol Squadron flew a P3-Orion, a prop plane, on missions that lasted up to 10 hours.

Pilot,  Lt. Commander Ed Arnold said  they “typically go out and check in with a surface unit from that nation. And  they direct us to what they want us to find. And we’ll go out and look for a case of  illegal fishing activities, things of that nature, and report them back to that surface unit. And then they’ll go out and try and catch em.”

Flight Leader, Lt. Commander Tim Thompson emphasized they are not law enforcers. Rather they are the the eyes and ears for the U.S.
Coast Guard and the island nations of the Western Pacific. “The U.S. Navy is not authorized to conduct law enforcement activities,” said Thompson, “that’s strictly the U.S. Coast Guard” and the Coast Guards of each island nation.

He said it’s important to allow “various island nations to understand the kind of activity inside their exclusive economic zones” so that they can protect “their sources of income.”

The P-3 is packed with advanced electronics that can actually pick up the signal of fish aggravators,  buoys planted by fishermen to attract a catch. The plane can also read the signals from a ships transponder and determine the ships location, name and origin. It can also take pictures of the vessel and transmit all that information down to the Coast Guard and local authority’s  in real time.

In all, 200 people from the U.S. Navy, the Coast Guard, and personnel from the FSM, Papua New Guinea and Palau took part in the week long exercise.