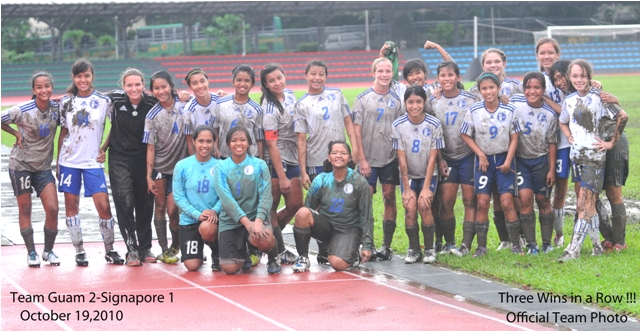 Guam- Guam is now 3-0 in the 2011 AFC Under-16 Women’s Championship qualifiers in Manila, Philippines after a 2-1 comeback victory over Singapore.

The aftermath of Supertyphoon Megi, which hit northern Philippines on Monday, meant the teams not only had to battle each other, but the severe muddy and rainy conditions as well.

The weather seemed to benefit Singapore at the start as they were able to take the lead after just five minutes. In a 1-on-1 situation with a Singapore forward, Guam goalkeeper Chyna Ramirez got a hand to the shot, but the ball still managed to make its way over the goal line after hitting the inside of the post.

After falling behind to the early goal, Guam responded in the 28th minute through Krystiana Martinez, who ran onto a chipped through ball from Hope Thompson and shot past the Singapore goalkeeper from 18 yards to level the score. Martinez has now scored in all three Guam matches so far and leads the team with four goals. The scored remained 1-1 at halftime.

Guam then started the second half as their opponents started the first, finding the back of the net just five minutes after the kickoff. The goal was scored by Abbey Iriarte, on as a substitute, as her 25-yard shot skipped past the keeper and into the goal to give Guam a 2-1 lead they wouldn’t relinquish.

“This is the first time a Guam team has ever won three straight matches in a qualifying competition,” GFA president Richard Lai said.

Guam now occupies first place in Group A, ahead of Vietnam who had a bye yesterday. Also yesterday, Philippines defeated Timor-Leste 6-0 to take sole possession of third place.

Guam has a bye on the next match day on Friday, where Singapore faces Timor-Leste and Vietnam plays Philippines. If Vietnam defeats the hosts, the last match day will see Guam face Vietnam for the all the marbles as only the top team can move on to the next round. The Guam vs. Vietnam match is scheduled for 9 a.m. Sunday (11a.m. Guam time).

Special thanks go to Cheri Stewart, media officer for the Guam delegation, for providing information for this media release.