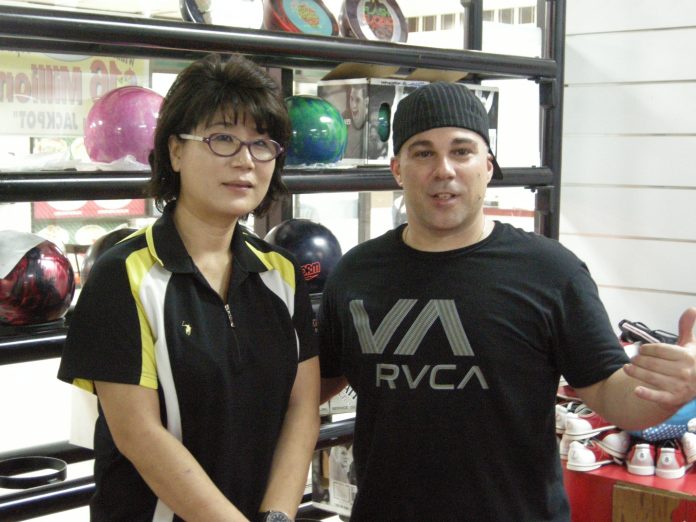 Guam – Frank Russo and Kim Arriola claimed their first monthly titles of the 2011 Budweiser King and Prince(ss) of the Lanes held at the Central LanesBowling Center on Sunday, September 18, 2011.

Russo mutilated the lanes on his way to the championship match to scorn top seed Tyler Bishop for the title. Bishop opened the match with a four bagger continuing his hot streak from the qualifying rounds and the semi-final match to take an early lead from Russo. However, a mishap on the fifth frame saw the ball sail left of the pin ten that startled Bishop. Russo jumped all over the open frame and began stringing strikes to close the gap. Henceforth, Bishop was unable to recover from the missed frame ending with a 170 game against Russo’s strike fest 258.

The semi-final and quarter final rounds witnessed a storm of strikes as all competitors slugged it out for the title birth. Top seed Bishop threw 11 strikes in the semi-final match for a 277 victory over 5th seed and early qualifying round leader Michael Joya who matched Bishop during the first five frames with strikes before leaving a 4-7-10 split which cost him the match finishing with a 220 game. On the adjoining lanes, Frank Russo did not leave much hope for 2nd seed Manny Tagle as he sailed to a 255 to 228 margin to set up the finals match up.

Kim Arriola claimed her first ever Budweiser Prince(ss) of the Lanes title knocking off Greg Borja in the monthly finals with a 192+57 to 183+36 victory over the hot handed top seed. Borja was unable to shake loose of Arriola during the entire match as Arriola was able to counter ever spare and strike that Borja threw during the course of the match.

The next Budweiser King and Prince of the Lanes will be held on Sunday, October 23, 2011 at 9:00 a.m. at the Central Lanes Bowling Center.