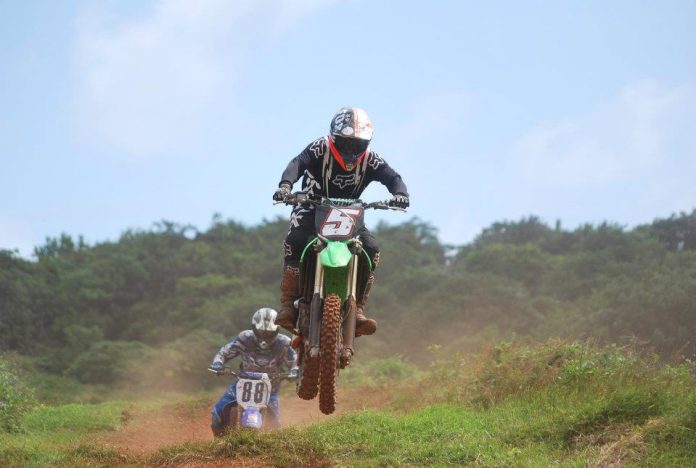 Guam – On Sunday at the Guam International Raceway in Yigo race fans attending the fifth round of the six round Cycles Plus Honda Monsoon Motocross series saw a day packed with close wheel to wheel motorcycle and atv racing. With the sun ablaze and a stiff breeze blowing the track conditions quickly became dry and dusty making for a very slick and hard packed course to negotiate for the competitors. The race action kicked off at 1:30pm and saw class action ranging from kids minibike and atv’s on up to the full sized two and four wheeled machines.

Highlights
250cc class championship points leader #915 Anthony Ignacio aboard his Yamaha Yzf250 had his handful this past Sunday with the Johnstone supported Kawasaki of #42 JR Cepeda as the duo went at it back and forth in each of their two 250cc class heats. In heat one Ignacio had taken the lead with Cepeda shadowing his every move for the first lap and a half of the five lap heat before over committing and going down.

After quickly remounting Cepeda reentered the race back in the fifth place position and had begun a steady march back up towards the leader Ignacio. At the finish of heat one Cepeda out of laps and time had moved back into second place with Ignacio taking the heat one win. #33 Jake Jones aboard his Triple J supported Honda who had inherited the second place position when Cepeda had gone down also went down losing several positions. Taking third was #5 Shawn Aguilo aboard the team Cycles Plus Kawasaki with #88 Gary Camacho in fourth and Jones after remounting taking fifth.

In heat two the #42 of Cepeda shot up to the front of the 250cc class with Ignacio, Jones, and #3 Jacob Einloth this time right on his rear wheel respectively. Lap by lap Cepeda was able to pull away from the rest of the field and go on to take the heat two win and the round five overall win for the 250cc class. Ignacio took second with Jones, Aguilo, and #88 Gary Camach rounding out the top five overall. Finishing sixth through tenth respectively were #3 Jacob Einloth, #52 David Yamasta, #948 Devin Castro, and #19 Zachary Chang.

With just one round remaining the fight for the 250cc series championship is just a close margin of five points and will have to be decided at the final sixth round. Anthony Ignacio with 218 points has a slight five point lead over JR Cepeda who has 213 points. Both riders look determined and ready to take it. The final round looks to have built itself up for these two riders as being the round to have to win. 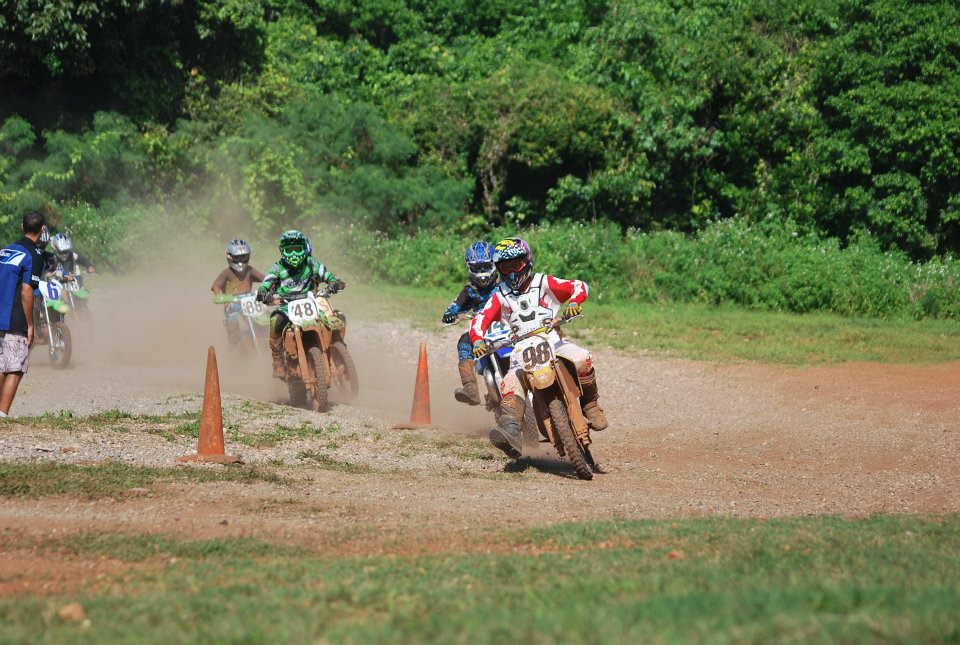 Caleb Barretto extended his lead in the series championship points to 41 points with 242 points earned over Anthony Ignacio who now stands with 201 points and JR Cepeda who has 198 points. With just one round remaining to be held on Sunday December 4th   Barretto only needs to finish one heat to wrap up this years Cycles Plus Honda Monsoon Motocross Open Motorcycle class championship. The close battle and an intense one at that is the fight for second between Ignacio on his Yamaha and Cepeda aboard the Kawasaki.

In the 85cc class #14 Andrew Ignacio on his Yamaha and #98 Marshal Vawters Jr. aboard a Suzuki swapped heat wins with Andrew taking the round win and with Marshal taking second. Third place went #35 Michael Murphy aboard a Kawasaki with first time racer #48 Dominick Fernandez placing fourth in his first race ever.

Back on the track was the 65cc minibike class. The 65cc class is made up of riders aged 8 to 12 years old and includes 65cc class two stroke motored and 110cc four stroke motored machines. Taking the win was #6 Stoney Bucek aboard a Kawasaki 110. Stoney was followed by second place finisher #88 Ethan Camacho aboard a Kawasaki Kx65. Third went to #8 Ry’niko Camacho also on a Kawasaki Kx65. Fourth was taken by #34 Tim Murphy on yet another Kawasaki Kx65. The second place finishers through fourth place were all first time racers having taken the checkered flag for their first time ever. 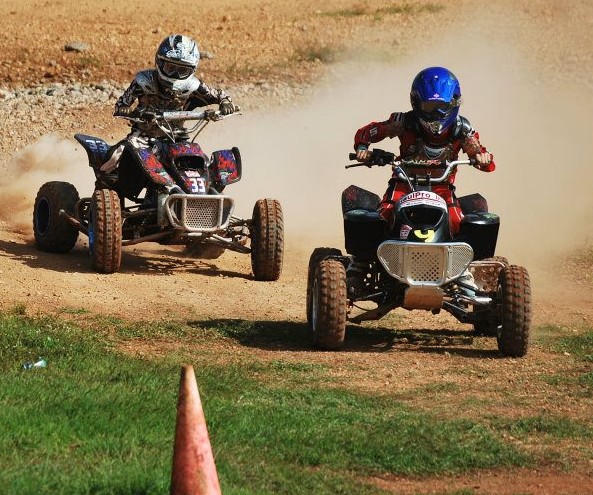 The battle in the Open Atv class has been growing between the Suzuki mounted #9 of Ramon Torres and the #5 Honda of Marcus Guerrero Jr.. The two rookie open atv racers have been bar bashing through out the series and coming into the fifth round Guerrero was holding onto a three point lead over Torres in the series points. At the start Torres took the early lead but was passed momentarily by Guerrero who was determined to take the win. The two leaders fought it out racing side by side elbow to elbow at times with neither willing to give an inch o the other. At the checkers Torres was able to edge out Guerrero for the win with Guerrero taking second and #9 Keara Bucek once again aboard the RPM Yamaha Yfz450 placing third. With Torres’s win he moves himself up into the series lead by three points with a total of 229 points over Guerrero who now stands in second with 226 points. This battle for the championship will also come down to the final heat of the final round on December 4th. 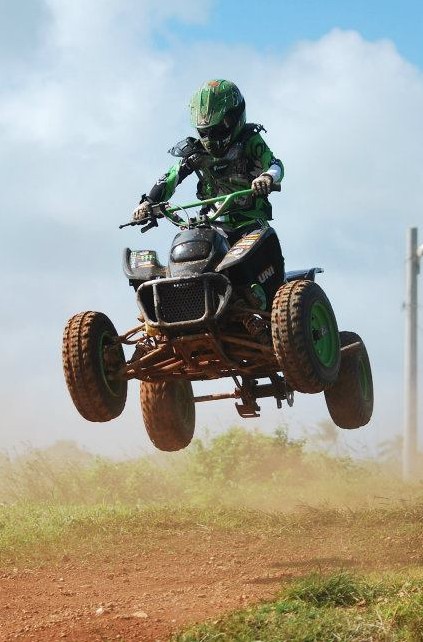 Jeric Johnson used his head and rode a smart race to take the round five win aboard his #66 DRX90 in the Kids Open Mini Atv class. #11 Jose Simpson who dominated the first of the two heats had mechanical issues to overcome in the second heat which left him with a second place overall for the round. In heat one #9 Janissa Torres aboard her Apex90 also had to overcome issues but came back strong to dominate the second heat with a win giving her a third place overall for the round. Also finishing strong in the round respectively were #3 Bernabe Guerrero, #99 Victoria Clark, #75 Jesse Leon Guerrero, #23 Jordan Leon Guerrero, #33 Collin Ray Cruz, and #21 Dylan Baza

Round five of the six round Cycles Plus Honda Monsoon Motocross Series will be held on Sunday December 4th at the Guam International Raceway in Yigo. It will be once again free to come out and watch with racing set to begin around 1:30pm. For more information, results, standings video and photos visit www.AtvMotocrossGuam.com or call GRF PIO Robert Bucek at 727-5381.