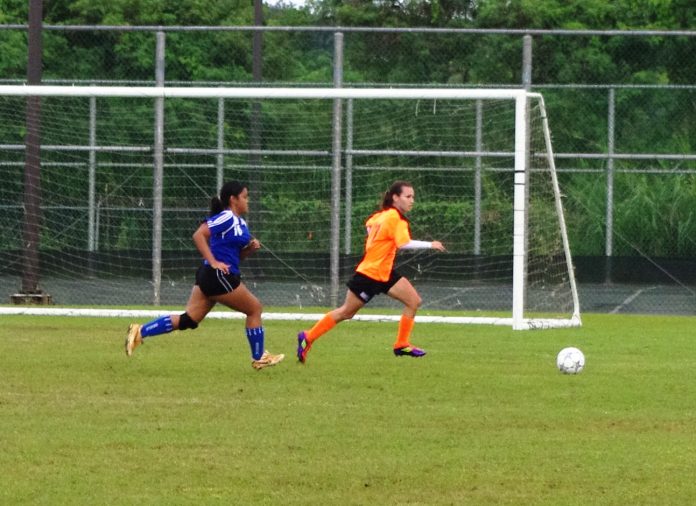 Guam – Week 3 has come and gone for the 2011 GFA Bud Light Women’s 7 A-Side League this past Sunday at the GFA Training Facility in Harmon with the following results:

Orange Crushers 4 – 2 Guam Shipyard: Defending champion Orange Crushers continued their winning ways as they ran over a determined Guam Shipyard team. Crushers (3-0) came out in force as Crushers’ Kristin Thompson struck first just two minutes into the first half against Shipyard (2 -1). Thompson notched two goals in the match and teammates Tatyana Ungacta and Simie Willter added one each for the win. Shipyard’s Deidre Weakley and Erica Quichocho scored one goal each for Shipyard.

Paintco Lady Strykers 10 – 2 Subaru STI: Both teams battled to a 2-2 first half before the Lady Strykers got their rhythm and scored eight goals in their second half thrashing of Subaru STI. Strykers Deana Garcia, Caroline Quigley and Phoebe Minato each scored a hat trick and Felicia Alumgaugh added one goal for the win. Ameera Haynes and Margret Ha scored one goal each for Subaru STI.

dck Masters 6 – 3 Guahan.com: Christine Simard, Rachel Jordan Scott and Cara Walsh each scored a brace to lead the dck Masters to a 6-3 win over an improving Guahan.com. Christine Ubaldo scored two goals and Tiffany Tallada added the other goal for Guahan.com (0-3).

Quality Distributors 2 – 0 Pretzelmakers Bombers:  Quality got a brace from Nieves Cabreza to improve to 2-1.