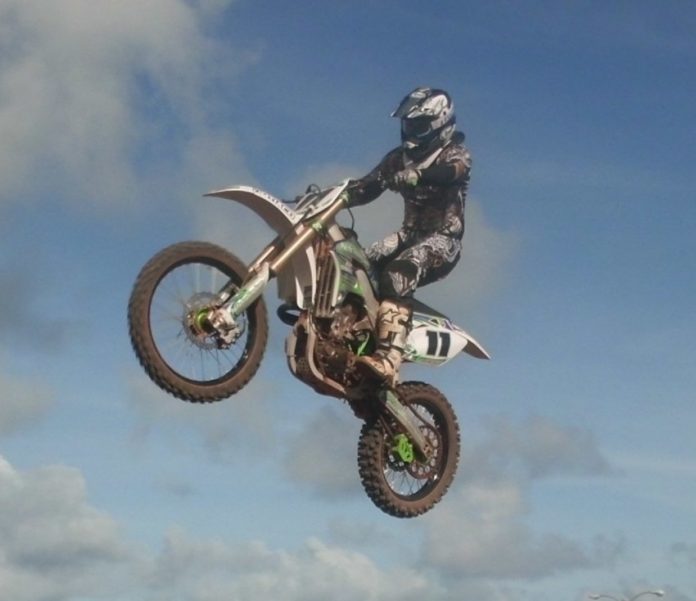 Guam – The first of the scheduled ten round Monster Energy Guam Motocross Championships series kicked off this past Sunday at the Guam International Raceway under ideal weather and track conditions. Motocross racers from around the island competed in respective classes that ranged from kids 50cc mini bike and atvs classes all the way up to the big bikes and atv’s of the open classes. The event was free for everyone who wanted to watch all the high flying side by side bar banging action with the racing having started at 1pm and ending at just about 5pm.

In the Open Motorcycle class new comer #27 Travis Frawnfelder, aboard a Yamaha Yzf 450, spat himself up to an early lead, launching and twisting his big blue machine through the air over the many jumps that make up the course. Following behind the high flying Frawnfelder was a pack of Guam’s best motocrosser’s that included #99 Caleb Barretto, aboard his RMZ450 Suzuki, running in the second place position and defending Guam 450cc champ #11 Michael Limtiaco in third who was breathing down Barretto’s rear wheel hot and heavy. Behind the lead trio saw #33 Jake Jones, aboard his Triple J supported Honda Crf250, and #53 Tom Tarnate doing battle for the fourth place position. Just out of the top five #94 Bryan Barker, aboard his Yamaha Yzf450, went down as he worked his way through the rhythm section of the course while attempting to improve on his position. Barker was able to limp off and out of contention under his own power having suffered a sprain in his back. In the meantime, #88 Antonio Cabe, #111 Jacob Einloth and #5 Shawn Aguilo was packed together all battling for the 6th, 7th, and 8th position. By midway into the heat the leader Frawnfelder had managed to pull away from the battling Limtiaco and Barretto who were still, at times, elbow to elbow in their battle for the second place position. The rest of the field had strung themselves out settling in for the final push to the finish with Jones, Tarnate, Einloth, Cabe, and Aguilo running 4th through 8th respectively. At the finish Frawnfelder took an easy heat 1 win with Limtiaco making a last lap pass on Barretto to take 2nd with Barretto 3rd. Jones took 4th with Tarnate taking 5th. Einloth, Cabe and Aguilo finished 6th through 8th respectively in the heat.

At the start of the second and final heat as all the riders lined up for the Open Motorcycle class it became quickly apparent to all that the heat 1 winner, #27 Yamaha mounted Travis Frawnfelder, was not on the line ready to compete nor could he be located in the pit area. This left the track marshal no other choice but to start the heat with out him. One man’s loss is another ones gain as Michael Limtiaco aboard his Pacific Trucking supported Kawasaki Kxf450 was ready and willing to take full advantage of the absentee Frawnfelder. Limtiaco powered into the lead with Barretto in tow. The two leaders quickly put distance on the rest of the field who were now battling for 3rd. As the laps wound down, it appeared the reigning 450 champ Limtiaco had found his groove and had firmly taken command of the race easily taking the second heat win thereby giving him the overall round win in class. Taking second in the heat and for the round was the consistent and smooth Barretto. 3rd in the heat and 3rd overall in class was Jake Jones. After two heats Tarnate, Cabe, Einloth, Aguilo, Frawnfelder and Barker placed 4th through 9th overall respectively for the round in class.

The Open atv class saw a full field of competitors all battling for the championship. Fifteen time Guam Atv champ #1 Robert Bucek at the start once again took his Cycles Plus Suzuki Ltr450 right to the front of the field where he checked off laps until taking the win in each of the two heats run for the round. #20 Jerry Joaquin also aboard a Suzuki Ltr450 was the closest competitor to Bucek and was able to secure a strong 2nd in each of two heats to take second overall in class for the round. Taking 3rd overall was second generation Guam Atv competitor #6 Sade Pitter aboard a Honda Trx450. Rounding out the top five in class overall were #5 Marcus Guerrero aboard a Pine rental supported Honda Trx450 taking 4th place with 5th place going to the youngster #14 Travis Joaquin aboard a Simpson family Suzuki Ltr450. Just outside the top five overall #03 Anthony Costa on his GTR Motorsports supported Kawasaki Kfx450 secured the 6th place position with Aloha Maid supported rider #10 Shane Reyes taking 7th place aboard his Kawasaki Kfx450. The 8th and 9th place positions were earned by Marcus Guerrero Jr. and Duce Romias respectively.

The youngster were flying and had everyone on their feet as #14 Anthony Ignacio led every lap to take 1st place overall aboard his very fast Yamaha Yz85. Keeping the pressure on and thereby keeping Ignacio honest was the hard charging Kawasaki Kx85 supported by Johnstone Supply of #1 JR Cepeda and Honda Crf150 mounted #11 Rico Pereira. After Pereira and his Honda crashed out of the race Cepeda couldn’t be shaken as he stuck right behind the leader Ignacio’s rear wheel for the entire event at time pulling along side in an attempt to steal away the lead. Cepeda earned a very respectable 2nd place and if round 1 of the series is an indicator of things to come in upcoming rounds the battle between Cepeda and Ignacio only seem to be heating up. Taking third was #98 Marshal Vawters aboard his Suzuki Rm85 and was followed in fourth by #12 Andrew Ignacio aboard a Yamaha Yz85. taking 5th place was #10 Robit Casper Cabe aboard a Suzuki Rm85 with 6th place going to #4 Rowan Pereira aboard a Kawasaki Kx85.

A three way battle for the first place overall in class position ensued between #88 Janissa Torres aboard a Haul Pro supported DRX90, #11 Jose Simpson aboard his DRX90, and #18 Isaiah Reyes on a Aloha Maid supported DRX70. The trio swapped leads on several occasions with Janissa Torres just edging out Jose Simpson by a single point for the overall win. Simpson took 2nd place with a very first time racer Collin Ray Cruz taking 3rd aboard his #5 DRX70. Isaiah Reyes secured 4th place with his younger brother Luke Reyes taking 5th aboard unbelievably a DRX50. 6th through 10th was taken respectively by the following #99 Victoria Clark aboard a Dream Catchers Apex70, #9 Ramon Torres aboard a Haul Pro Apex90, #3 Bernabe Guerrero aboard a Pine rental supported DRX90, #8 Aubrey Tiamanglo aboard her DRX90 and #6 Stoney Bucek aboard a Simpson family DRX70.

Round 2 of the Monster Energy Guam Motocross Championships will be held this coming Sunday February 27th at the Guam International Raceway in Yigo. Racing is set to begin at 1pm and will be once again free for those who would like to come watch the action. For more information contact the Guam Racing Federation Public Information Office at 727-5381, e-mail track@guam.net, visit www.AtvMotocrossGuam.com .