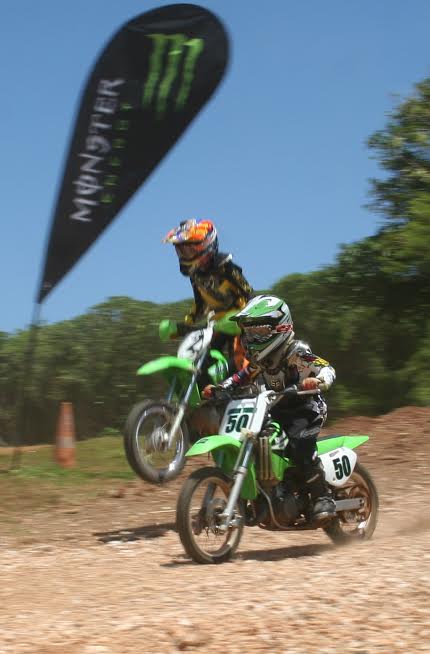 Yigo, Guam – Round 4 of the fifteen round 2014 Monster Energy Guam Motocross Championships was held this past Sunday March 16th at the Guam International Raceway. With just two weeks left participants were using the event to prepare themselves for the upcoming Guam Smokin Wheels Weekend happening from April 11th through the 13th at the Guam International Raceway. The racing was non stop kicking off at noon and going until just past 5pm. Classes ranged from the smallest kids classes up to the biggest full sized earth gobbling open motorcycle and atv classes. The track had just received an overhaul with new red dirt set down and lots of new sections with jumps to challenge the racer and thrill the fan. The event had been free to come out and watch and many of our islands offroad fans were there in support.

In the Open Motorcycle class a trio of riders at the start broke away from the large pack to battle for the win. #33 Jake Jones riding the Triple J supported Honda, Caleb Barretto aboard the #5 Cycles Plus Kawasaki and the two time and reigning Guam champ #1 JR Cepeda on the Cycles Plus Kawasaki immediately set a blistering pace up front. Cepeda wasted no time and took charge taking the lead and starting his charge to stretch that lead leaving the #5 of Barretto and the #33 of Jones to fight over the runner up position. Cepeda had dominated the round stretching his lead on every lap and easily took yet another round win in the championship. Taking second overall was Jake Jones who just edged out Barretto who placed third overall for the round. Fourth place went to veteran rider and rock and roll singer #420 Kim Aiken aboard a Kawasaki with fifth place going to yet another veteran rider #75 Jeff Rios. Rounding out the top ten respectively were #3 Gary Camacho Yamaha, veteran rider #100 Steven Turo Kawasaki, #15 Matt Guzman Honda, #19 Zachary Chang Honda, and in tenth veteran rider #768 James Gallagher Yamaha.

In the Open Atv class #1 Robert Bucek aboard the Cycles Plus Suzuki took the win over #66 Yamaha mounted Jeric Johnson. Taking third was #11 John Gilman aboard a Yamaha with #15 Albert Garlit finishing fourth.

In the Open Minibike class a very fast pack of riders jumped up front and fought it out for the overall round win. At the beginning the reigning champ #1 Stoney Bucek on the Cycles Plus Kawasaki was in the lead and pulling away from the rest of the field but unfortunately had went down third of the way into the round. Bucek remounted but had dropped to sixth which allowed the current championship point’s leader #8 Ry’niko Camacho to take the lead with his older brother #88 Ethan Camacho and the #11 of Sasha Song right behind him. By midway Ry,niko was in complete charge up front with Sasha Song in second and Bucek making a charge in third. At the finish it was Ry’niko Camacho keeping his win streak alive in first, Bucek in second, Song in third. Rounding out the rest of the Open Minibike field respectively were #88 Ethan Camacho Yamaha, #12 Yuna Song Honda, #25 Ethan Turo Kawasaki, #75 Owen Rios Kawasaki, #111 Ethan Manibusan Honda, and #21 Franklin Perez Kawasaki.

In the 65cc minibike class a class that has grown in popularity to large in numbers and required a separate race from the rest of the Open Minibike class the islands youngest motocross racers banged bars and hit the jumps thrilling the crowd. Up front it was a Blaze Aiken on the #2 Kawasaki and #50 kawasaki mounted Owen Turo show as the duo put on the closest racing of the entire round often going off jumps side by side as they fought it out for the round win. The first half of the round the #50 Kawasaki of Turo had the edge up front but going into the second half it was the #2 of Blaze Aiken pushing hard to take over the lead. With just two laps remaining Aiken made his move and made the pass to take the lead from Turo. At the finish it was Aiken taking the win with Turo in second. Third went to hard charger #23 Jordan Leon Guerrero edging out #4 Tobin Perez who placed fourth. Rounding out the rest of the 65cc minibike field respectively were #31 Robert Encina Kawasaki, #76 Devin Encina Kawasaki, #5 Jesse Leon Guerrero Kawasaki, and #22 Casey Gallagher Kawasaki.

[Photo: #50 Owen Turo and #2 Blaze Aiken battle for the lead through round 4 in the Monster Energy Motocross racing series.  Photo courtesy of Bob Bucek.]

In the Open Kids Mini Atv class #10 Tori Clark swept both heats on her Apex 90 to take the round win with #7 Darian Chang on a DRX taking second, Zion Manibusan in third and Gamian Manibusan finishing in fourth.

In other class results:

Next up will be round 5 of the Monster Energy Guam Motocross Championships on Sunday April 12th at the Guam International Raceway in Yigo. The round five event will be part of this years Guam Smokin Wheels with gates that will open at 6am with racing set to kick off at 8am. For more information visit  http://www.AtvMotocrossGuam.com or call the Guam Racing Federations Public Information Officer at 727-5381.