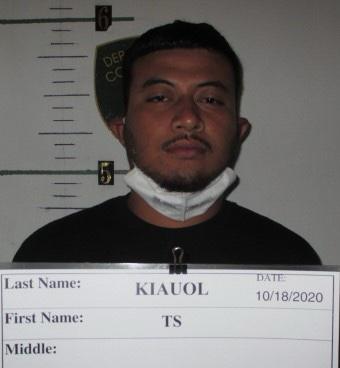 Police say that on Sunday October 18, their officers were dispatched to a residence in Barrigada, after a trespassing complaint was reported a little before 7 a.m.

The victim told police that he was woken up by his partner, who told him that there was a trespasser in the kitchen.

The victim says he in fact found a male standing in the kitchen and had to physically escort him out of the home. He apparently then walked to a neighbor’s house.

The alleged trespasser was later identified as 22-year-old TS Kiauol.

According to court documents, while being detained, the defendant repeatedly told officers that he was being arrested because he was Chuukese. At one point, police say Kiauol pleaded with an officer to let him go.

According to the police report, Kiauol said, ”I got in trouble for this before.”

The defendant later than told officers that he was just looking for his uncle’s house that was in the area.

Officers say during the arrest, Kiauol had trouble maintaining his balance, bloodshot, watery eyes, and smelled of alcohol.

The transporting officer reported that the defendant was upset and repeatedly slammed his head into the seat of the police car. Because of this behavior, police say he was not interviewed.