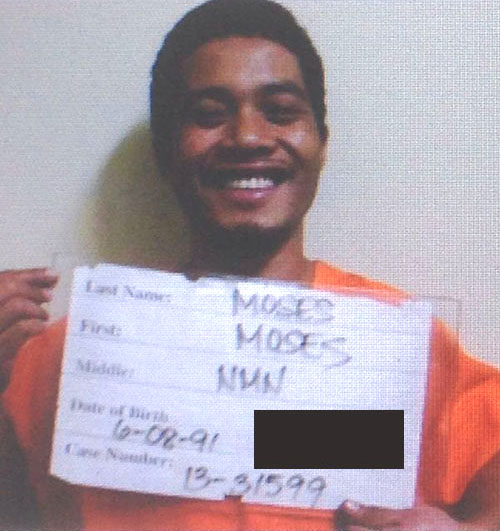 Guam –  22 year old Moses Moses was charged in Superior Court Monday with an armed robbery that occured just after 3am Sunday morning at the 24 Hour Wash & Dry Laundromate in Maite.

Police have also accused him of robbing the tri-intersection Shell and the 76 station across the street, both of which occurred last week.

According to GPD Spokesman Officer A.J. Balajadia Moses admitted to all 3 armed robberies saying he “needed pampers for his 4 month old daughter.”

Moses has been booked and confined on 3 counts 1st Degree Robbery, and 3 counts of  Use of a Deadly Weapon in the Commission of a Felony.

In this morning’s robbery, Officer Balajadia reports that a man entered the laundromat from the rear entrance shortly after 3am and “brandished what appeared to be a handgun and demanded money.” He fled on foot after getting cash and coins.

A short time later, a security Guard at the nearby LG’s Place noticed a man getting into a black Nissan Sentra and drive away. The guard wrote down the license plate number.

Officers from the Hagatna Precinct later spotted and stopped the vehicle on Joleen Leon Guerrero Street in Barrigada.  Moses was detained and, according to Officer Balajadia, Moses admitted he had robbed the Laundromat earlier.  The cash and coins were recovered from under a pallet along side a house.

In the same bag, officers also found 5 packs of Marlboro Green cigarettes, which were among the items stolen from the Shell and 76 gas stations.

“After questioning Moses about the cigarettes, he told the officers he had also robbed 76 and Shell”, states Officer Balajadia’s release.

Balajadia also says that Moses has prior arrests for Disorderly Conduct and Public Drunkenness.

According to the victim a male entered the laundry from the rear and brandished what appeared to be a handgun and demanded money, the victim gave him cash and coins.  The suspect left on foot out the rear and down an empty lot onto Roy T Damien Street.  A security guard at LG’s Place, reported that between 3:20am and 3:30am a black Nissan Sentra was parked in the parking lot, the male occupant walked around the area and was later seen jumping over the divider wall on Roy T Daimen, then left in his vehicle.  The guard wrote down the license plate number.

Officers from the Hagatna Precinct located the suspect vehicle on Joleen Leon Guerrero Street, Barrigada.  Moses Moses, m/chuuk/23/Barrigada, was advised of his rights and questioned about his whereabouts, he admitted he had robbed the Laundromat earlier.  He pointed out where he put the cash/coins under a pallet along side the house.  In the same bag, officers noted 5 packs of Marlboro Green cigarettes, items stolen from Shell and 76 robberies.  After questioning Moses about the cigarettes, he told the officers he had also robbed 76 and Shell.  Moses said he needed pampers for his 4 month old daughter.

Moses was charged with 2nd degree robbery for the laundromat, and then turned over to Detectives with Criminal Investigations Section for further interview in reference to the other two robberies.

BARRIGADA –  Wednesday, April 25, 2014, 3:00am,  officers from the Hagatna Precinct Command responded to a reported robbery the Barrigada Shell Station.

The victim reported a male entered the store wearing gray shorts, black long sleeve shirt, gray long sleeve tied around his head, brandishing a black and silver pellet gun and demanded money with a Chamorro accent. He reportedly discharged the pellet gun into the alcohol bottles behind the registered. He also demanded Marlboro green cigarettes. He then left the the station on foot, walking to the side of the station toward the fire station.

The suspect entered the front/main door of the 76 gas station armed with a black pistol.  Immediately upon entering, the male suspect pointed the black hand gun towards the cashier and instructed him to empty out the cash register and place the cash into the white plastic bag.  He further instructed the male cashier to place 10 packs of Marlboro Green Lights cigarettes into the white plastic bag.  The cashier complied, whereby the suspect immediately fled from the scene on foot towards New Happy Mart/Radio Barrigada area.

MOSES MOSES, m/chuuk/23/Barrigada, with additionally charged with robbing the Barrigada Shell Station and 76 CircleK Station.  He was charged with 3counts 1st Degree Robbery, and 3counts of Use of a Deadly Weapon in the Commission of a Felony. He was booked and confined.