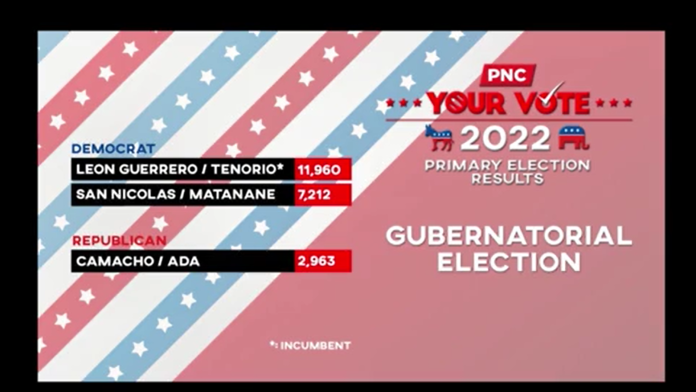 The ballots were tallied and the results were cast for the 2022 Primary election.

Here is PNC’s Don Sulat with the recap of Saturday’s events.

Following over 12 hours of counting, the people of Guam have chosen who will run in the November General Election.

The polls opened at 7 am across the island, and PNC was able to speak with various political figures, and citizens as well.

One political figure that PNC was able to speak with is Governor Lou Leon Guerrero at JFK Highschool, where she voted and gave her remarks on the election and her campaign.

Another figure that PNC spoke to is Congressional candidate and Republican Senator, James Moylan.

He gave his remarks on the election, and how he hopes that citizens will come out to vote to voice who they want to lead them saying, “What we’d like to see is the people make the choice. And then we’ll get into the General Election. But I’m happy to see all the hospitality tents are up here and people are setting up and inviting all their voters to come on out. The candidates all worked hard to get this far, and that’s why we need your support and you make the choice, come out and vote today.”

For the 2022 Primary Election, eyes were on who will represent the Democrats in the General Election, against the Republican team of former Governor Felix Camacho, and Senator Tony Ada.

Ultimately, the Leon Guerrero – Tenorio team pulled on top with 11,960 votes, against the San – Nicolas Matanane team with 7,212 votes.

The Camacho-Ada team was able to meet the 4% requirement to enter the General Election, with 2,963 votes.

As for who might represent Guam in Congress. On the Democratic side, Former Speaker Judi Won Pat pulled out on top against Senator Telena Nelson, with 9,678 votes, while Senator Nelson had 7,741 votes.

The Former Speaker will be facing off against Republican Congressional Candidate and Republican Senator, James Moylan, who was also able to gain the 4% vote requirement with 2,591 votes.

The vote count totaled a little over 12 hours, with a 40% registered voter turnout – totaling 23,261 ballot casts.

The reason for the delay in the vote count, according to Guam Election Commission Director, Maria Pangelinan, is due to some voters incorrectly filling out their ballots.

Saying that some voters check marked their ballot instead of bubbling it in caused a delay in the counting process.