Guam – 17 year old Dorilena Cepeda Chinel has been charged with Conspiracy to Commit Theft in connection with the theft of a pursue from a woman who was sitting inside the Santa Barbara Church in Dededo.

She is the second person to be charged and, according to the Magistrate’s  complaint, she told police that a 16-year old minor in her company was the person who actually snatched the purse.

The incident happened on Tuesday May 7th. The victim, Remedios C. Marasigan, was sitting inside the church at 5:47am, waiting for Mass to begin, when she heard some “commotion” and then noticed her pursue was missing.

Witnesses inside the church told police they saw a “young man dressed in a hooded jacket running out of the church carrying Victim’s purse.”  The witnesses reported seeing the young man get into a maroon SUV which then sped away from the scene. The purse had about $500-dollars worth of items in it and her credit cards.

The next day, a stolen maroon Suzuki Grand Vitara was found in the parking lot of the Tamuning Plaza Hotel. Officers learned that Joseph Joaquin Palomo had been driving the vehicle and when they checked his room at the hotel they found him, the keys to the Suzuki, the victims stolen credit cards and 17 year old Chinel along with a 16 year old minor identified by the initials J.B.

The 25 year old Palomo was charged last Friday with theft of a motor vehicle and for possesion of the stolen credit cards.

Chinel “initially denied any knowledge of how the car and credit cards were stolen” so she was released. But this past Monday, Police re-interviewed her and “she admitted her involvement in the theft.”

The Magistrate’s report states that Chinel told Police that Palomo picked her and 16 year old J.P. up about 4am on May 7th and they all drove to the Santa Barbara Church where Chinel said Palomo “told J.P. to ‘grab any purse’ [J.P.] sees and run.”

Chinel says she then told J.P. “‘Do what you gotta do to survive.”

Chinel said she then gave J.P. her hooded jacket to wear so he couldn’t be identified and “J.P. then ran into the church and stole Victim’s purse. All three drove away in the stolen maroon in color SUV.” 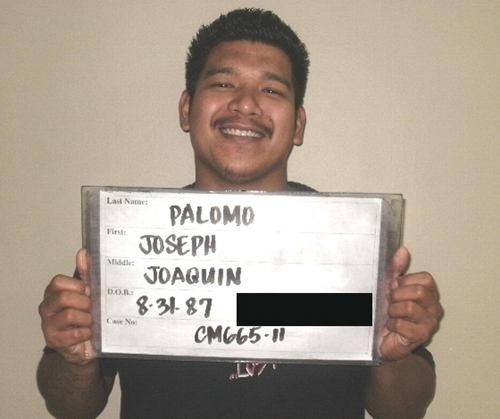