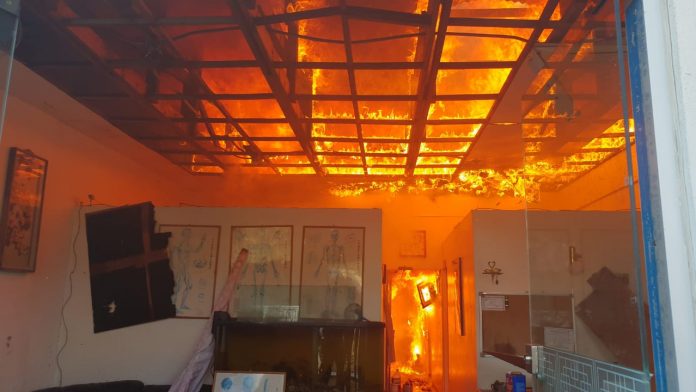 Saipan – A second structural fire has ensued in the heart of Garapan, Saipan, a blaze much much more massive than the first fire in Kagman yesterday. PNC responded to the while on a ride-along tour with DFEMS’s PIO Bobbie Jean Taisacan.

Just after noon today, PIO Taisacan for the Department of Fire and Emergency Medical Service gets a call of a structural fire at Pretty Market in Garapan. Upon arrival the fire had engulfed a significant portion of the store with DFEMS units battling the blaze from the establishment’s front entrance.

Unable to enter the inferno, firefighters move to roof, side and rear of the building. Winds gradually pushed the blaze farther down the line of structures, reaching Fujitech a local business and dozens of living quarters which left about 30 people homeless today.

PNC meets with several of those who lived either inside Pretty Market or in the barrackses that surrounds the compound, many of whom placed blame on the 3 generators that were allegedly operating inside the building when the fire ensued.

According to one of the residents, he was atop the roof his home shares with Pretty Market when he noticed the smoky aroma coming from beneath him.

He then attempted to fight the blaze himself with a nearby fire extinguisher, which proved unsuccessful. That was when he says fire units rushed into the building and evacuated every occupant.

We also met with another victim, who told PNC that her 6 month old child was in her room, located directly behind the market when thick smoke filled the air. She then rushed inside to save her baby but did not have time to save her family’s passports, visas and clothes.

The fire spread relentlessly throughout the course of the afternoon, with vital water supply that were on their way to emergency shelters forcibly redirected to Garapan. Between about 4 or 5 water-tank trucks, non-potable water was being collected and pumped into the island’s only fire engine. The nearby Century Hotel’s General Manager Ivan Quichocho tells PNC that he has since volunteered his personal water-tank truck to the force battling the blaze.

GM Quichocho adds, that approximately 200 feet from the spreading inferno, sat around 400 gallons of diesel and another tank of propane gas used for Shirley’s, a local eatery located within the hotel.

It is now the 6th hour since noon and from PNC’s 3rd floor hotel room at the Century Hotel, DFEMS and Department of Public Safety men and women are seen containing the blaze and directing traffic as well as residents alongside the road, left homeless after the fire.