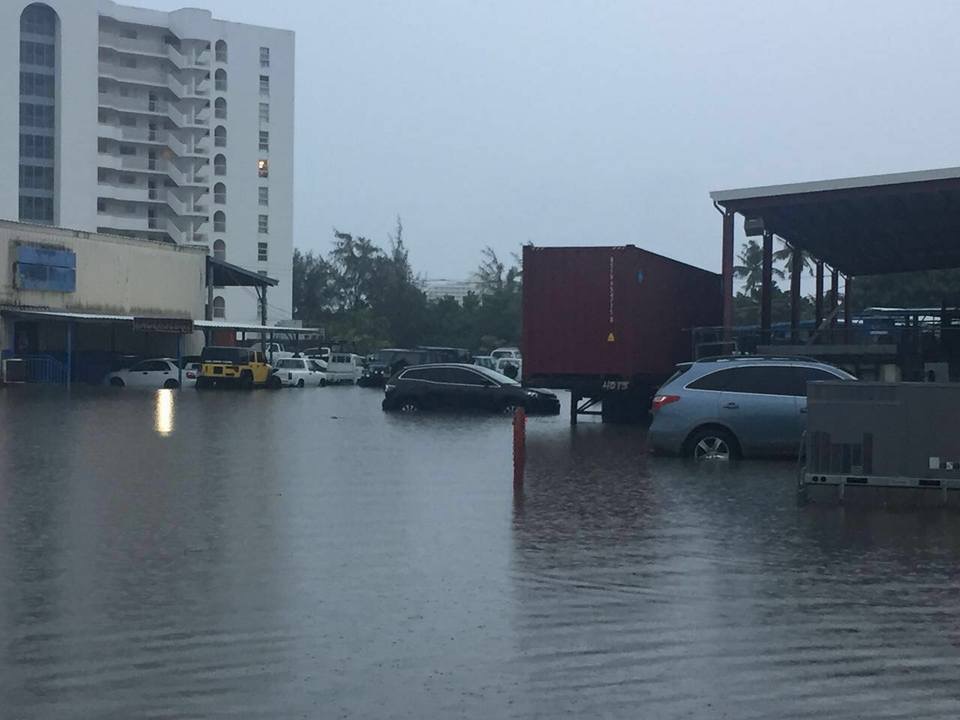 We could expect more rain tonight(Fri.) and through the weekend as there is a weak disturbance to the East of Guam.

Guam – The National Weather Service says this morning’s(Fri.) heavy downpour caught them by surprise as the clouds developed rapidly right over Guam dumping 3-4 inches on the island in an hour. There could be some more rain to come over the weekend as there is a disturbance to the East of Guam.

Where did all this rain come from? “Well actually it seemed almost to come out of nowhere. Conditions are unstable right now and we see these developments that pop up out over the water on occasion but this time it developed suddenly around between four and five o’clock and just happened to be right over Guam,” said NWS Meteorologist Mike Middlebrook. Middlebrook says that 3-4 inches of rain poured down on Guam in the span of about an hour.

The NWS issued a flood advisory at about 7am and this morning(Fri.) and soon after pictures and videos of flooding filled social media. There was flooding in Pulantat Yona, Barrigada, West O’Brien Drive, and other low-lying areas.

The heavy downpour also exposed some leaks at the Guam Memorial Hospital. GMH Administrator Peter John Camacho confirmed that there are leaks throughout various parts of the hospital. He says staff sopped up water from the floors with damaged linens. He wanted to be clear that these linens are only used for cleaning and not used for patients. He says they’ve been aware of these leaks but simply don’t have the money to fix them. Camacho says this is precisely why the hospital needs to borrow $125 million dollars for its modernization plan which includes $6 million to resurface the roof.

Meanwhile Middlebrook says we could expect more rain tonight(Fri.) and through the weekend as there is a weak disturbance to the East of Guam. “That could bring us some more rain in tonight and tomorrow and maybe into tomorrow night could be some more heavy rain but right now it doesn’t look like its developing into anything yet but we’re certainly keeping an eye on it,” said Middlebrook.

Middlebrook says the disturbance doesn’t appear to be very well organized and is only forecast at this time to pass through the Marianas North of Guam. “It could come through the Marianas as a weak circulation or possibly if it were to develop a little bit maybe even a depression or something but it would probably be North of Guam somewhere between Guam and Saipan,” said Middlebrook.

The NWS meteorologist reminds the public to pay attention to weather forecasts and warnings in order to remain safe during bad weather.