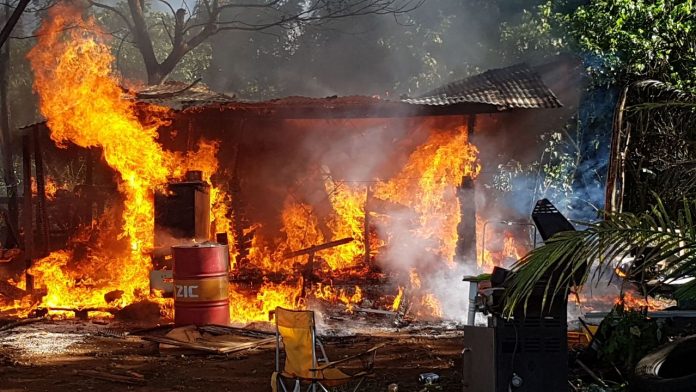 Guam – Less than 24 hours after a blaze in Dededo burned down a wood and tin structure, firefighters were once again fighting another fire also in the Dededo area. This is now the third fire involving a wood and tin structure–all in the Dededo area. Coincidence, or something more sinister? That is what the Guam Fire Department is trying to find out.

The first fire in occurred last week Tuesday along Ysengsong Road in Dededo. A large family was living in a wood and tin structure that went up in flames around 6 p.m. Fortunately, no one was around at the time but Guam Fire Department investigators are looking into the possibility that the fire was intentionally set.

Unverified reports from neighbors indicate that there may have been a landlord-tenant dispute right before the fire erupted. The Papinory Family was displaced as a result but the American Red Cross is working with the family to find a more permanent and safe shelter.

Next is a fire just further up north in Dededo, deep in the NCS area. It was reported yesterday at around 3 p.m., also of a wood and tin structure. There was a squatter in the area who at the time was unaccounted for but according to Dededo Mayor Melissa Savares, this was not the case.

“We did find out that it was a structure that did not have any utilities and there was an individual that was supposedly squatting in the area. We don’t have him registered as living in the particular area. It’s actually a family property … but it’s a makeshift structure. I did make contact with the individual’s mom last night. According to her, they were at the hospital because evidently the individual was at the structure during the time [and] did receive some burns. He was being treated,” Savares told News Talk K57’s Mornings with Patti host Patti Arroyo.

This morning, just after 8 a.m., not even 24 hours since the flames were put out in NCS,, yet another inferno in the Dededo area, this time near the Guam Regional Medical City. Our camera crew was the first to arrive on scene, well before firefighters even arrived.

GFD Spokesman Kevin Reilly says a ranch home made again of wood and tin was fully involved in the blaze. Our news videographer at the scene did not see anyone near the fire and Reilly later confirmed that no injuries were reported.

But as seen in the images, the area seemed to be set up for someone actively staying in the structure, with a barbecue grill, some chairs and a table.

Meanwhile, the three Dededo fires aren’t the only ones keeping GFD busy. Yesterday, they were also down south near Umatac for a reported brush fire. And over the weekend, a kitchen mishap at the Leo Palace Resort’s Belvedere Hotel sent firefighters out the scene as guests were evacuated for their safety. According to Reilly, the Leo Palace fire was reported at around 12:40 p.m. and was contained within a half hour.

Reilly tells PNC that so far there is no evidence to suggest that any of the Dededo cases are related. All three Dededo cases remain open at this time. If anyone has information about any of these cases, you can contact GFD at 646-8810.