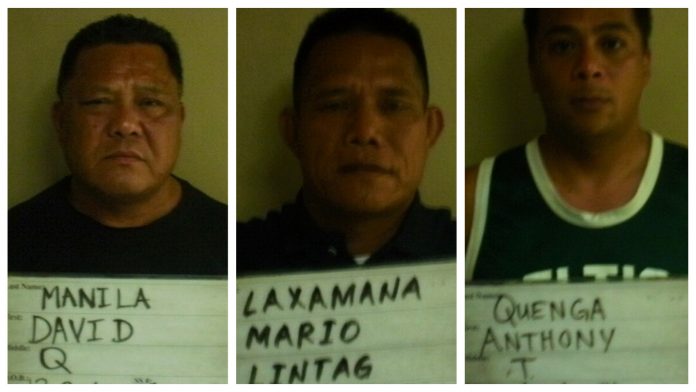 Officers Mario Laxamana, Anthony Quenga and David Manila were arrested and are now booked and confined at the Department of Corrections, according to DOC Spokesman Lt. Antone Aguon.

Aguon says Quenga was processed at about 11 pm last night (Friday), and Laxamana and Manila were processed around midnight.

All three were arrested by marshals, according to GPD Spokesman Officer A.J. Balajadia. He could not provide any comments at this time regarding the arrests. Balajadia says GPD is preparing an official statement in conjunction with the Attorney General’s Office and will release it to the media when they are ready. Both offices have been working together in the new Blue House investigation in light of mounting pressure from the public and media regarding the lack of arrests on police officers.

Manila had previously testified in the Blue House trial in the District Court of Guam in February 2011. He was a government witness and admitted to having sex with a Blue House Bar employee.

During trial, victims of the bar owner testified that two officers by the name of “Tony” and “Mario” threatened them and protected Song Ja Cha, the owner of Blue House Bar. Cha was sentenced in District Court in September to life in prison for her role in the sex trafficking crimes.

Aguon says a grand jury indictment was returned prompting a “warrant of arrest.”