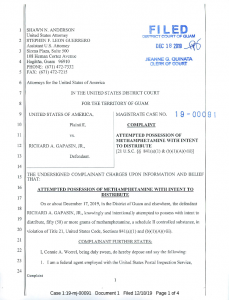 A complaint has been filed in the District Court of Guam accusing Richard Gapasin Jr. of receiving nearly 3 pounds of methamphetamine in the mail.

He is facing allegations of attempted possession of methamphetamine with intent to distribute.

Federal law enforcement agents arrested Gapasin outside the Barrigada Post Office on Tuesday morning. His arrest was captured on a number of different videos taken by witnesses outside the island’s main post office.

According to the complaint, a search warrant was issued Monday to U.S. Postal Service Agents for a package addressed to Gapasin.

Inside the package, agents found 1,355 grams or 2.98 pounds of a white crystalline substance that later tested presumptive positive for the presence of methamphetamine.

The meth was replaced with a sham substance and a GPS tracking device was placed inside.  The package was re-sealed.

Gapasin picked up the package at 11:10 a.m. Tuesday morning, placed it into his vehicle, and was about to drive away when nearly a dozen law enforcement officers surrounding his white SUV and placed him under arrest.

Gapasin provided a sworn written statement as to his involvement,” states the complaint.