The three senior officers completed the USAWC’s Distance Education Program, which also earned them a Master of Strategic Studies Degree.  Continuing professional education in the military is an essential requirement, both to enhance personal learning goals and to further professional careers.

The Distance Education Program consists of a series of 10 on-line courses and two, two-week resident courses, taken over a two-year period.  The U.S. Army War College develops, inspires and serves strategic leaders for the wise and effective application of national power, in a joint, interagency, intergovernmental, and multinational environment, emphasizing development and employment of land power, its website states.

At his graduation, LTC Robert A. Crisostomo was also granted the Military Order of the World Wars Award, for his strategic research paper, entitled “Strategic Guam: Past, Present, and Future”.  This special writing award was only one of twenty-five awards available to the 400 students of the USAWC Academic Year 2013 Class.

Major General Benny M .Paulino, The Adjutant General (TAG) for the Guam National Guard, praised his senior officers for their selection and completion of their higher military professional education program. He also pointed out that this year saw four graduates of the war college from the Guam Guard, the largest number so far in the organization’s history.

“I cannot overemphasize the importance of continuing professional education for all my commissioned officers, as well as my non-commissioned officers. This is part of their mandate as a leader, to improve themselves personally and professionally. Something like this not only elevates them professionally, but also provides the Guam National Guard more experienced and learned leaders,” Maj. Gen. Paulino said.

The new USAWC graduates provides the Guam National Guard an increased pool of vital and experienced leaders who can help guide the organization toward its placement in the nation’s global strategic plans in the foreseeable future. They also become an important strategic advisory resource for Gov. Eddie Baza Calvo, the Guam National Guard’s peacetime commander in chief, for the organization’s execution of its state mission, according to Maj. Gen. Paulino.

COL Limtiaco, Property and Fiscal Officer for the Guam Guard, noted that going through the program was not an easy task.

“The USAWC program was a challenging and rewarding experience.  Trying to balance a full-time job, familial obligations and fitting in a course load for a Master’s program in Strategic Studies was difficult.  The end result of this program is the satisfaction of understanding the bigger picture of an organization’s strategic direction.  I can now work with the Senior Staff and understand how to move the organization forward for successful endeavors,” Limtiaco said.

[Col. Norman Limtiaco receives his diploma after completing his course at the U.S. Army War College in Carlisle, PA.]

For COL Camacho, the USAWC program was also a challenge in terms of balancing his civilian career and the military requirements.

“The Distance Education Program was extremely difficult because I had to carefully divide my time between the daily and demanding coursework requirements, and my equally demanding responsibilities as a civilian attorney and as the commander of the 105th Troop Command, GUARNG.  Despite the challenges, it was a worthwhile program as greatly enhanced my ability to meet the high level changes currently facing our island and America’s armed forces globally.” 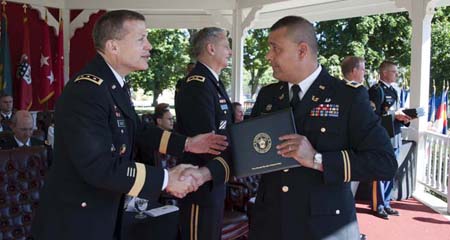 [Col. Anthony Camacho receives his diploma after completing his course at the U.S. Army War College in Carlisle, PA.]

LTC David Francisco shared what the course impressed on him with regards to today’s strategic environment and how senior military leaders will need to operate globally.

“At the strategic level, every decision will have its fair share of second and third order effects that will also have to be managed. As a result, strategic leaders must be skilled in clearly articulating military options and their associated risks. More often, these options require thinking outside traditional military paradigms and strategic leaders to exercise unshakeable moral courage.”

“The Army is at a crossroads requiring its strategic leaders to make hard choices as it transitions from over a decade of sustained conflict, and an uncertain future driven by continued fiscal constraints and an evolving security environment. Finding a delicate balance between readiness, effectiveness, and efficiency will require a paradigm shift and the moral courage to sustain it. The US Army War College aims at producing senior leaders capable of confronting this challenge and others just as complex,” Francisco added. 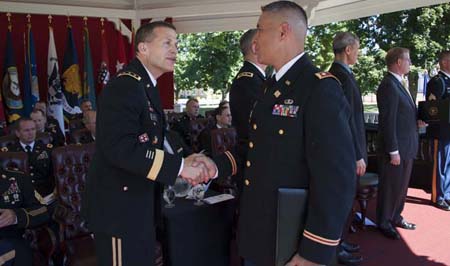 [ Lt. Col. David Francisco receives his diploma after completing his course at the U.S. Army War College in Carlisle, PA.]

The U.S. Army War College is the Army’s premier professional development institution that prepares selected military, civilian, and international leaders for the responsibilities of strategic leadership in a joint, interagency, intergovernmental, and multinational environment, its website describes.

Students who attend USAWC are mostly senior Army military officers. Officers from other branches of the U.S. military, as well as international officers and senior civilians from key agencies throughout the U.S. Government also attend the college. Students are carefully selected from within their parent organizations, as the college does not independently enroll students.