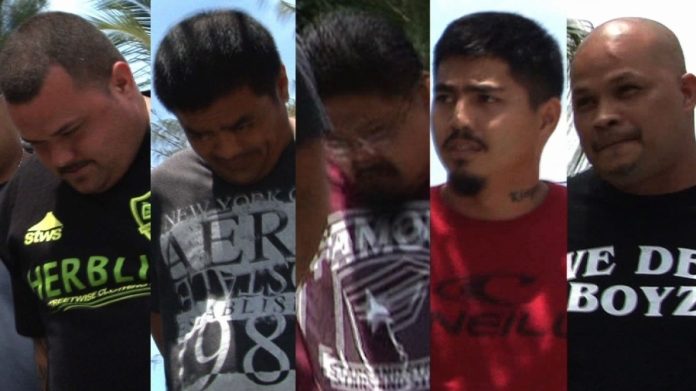 The three suspects were on pre-trial release at the time they allegedly participated in a riot at Linda’s Cafe Saturday morning.

Guam – The Attorney General’s Office confirms that three of the suspects involved in a riot at Linda’s Cafe over the weekend were the same men involved in another riot earlier this year.

Liberty Concepcion, Jovan Santos and Christian Medina were on pre-trial release when police say they got into a brawl at Linda’s early Saturday morning. The three men were allegedly captured on cell phone footage engaged in a brawl in March this year at the Dededo Cockfighting pit. The three men pleaded not guilty and were released on a $5,000 personal recognizance bond. Their trial was scheduled to begin in May next year.

But police say they were at it again. According to a magistrate report, Concepcion was seen in surveillance footage as three other defendants—Richard Ragadio, Jaycee White and Alfredo Castro—approached him.

Police say Medina, Santos, and two other men then ran outside of the restaurant to join the fight.// Concepcion, Santos and Medina have been issued a summons to appear in court.