JOINT FORCE HEADQUARTERS, Guam – The 31 Airmen deploying from the Guam Air National Guard’s 254th Security Forces Squadron were honored and recognized during a sendoff ceremony conducted at the Guard Readiness Center in Barrigada this morning [Wednesday].

The team departs within the next couple of weeks, for their six-month deployment to the Southwest Asia region in support of Operation Enduring Freedom.

Gov. Eddie Baza Calvo, speaking at the ceremony, reiterated his administration’s support for the families of the Airmen, and challenged the island community to do the same.

“While you’re out there, this island community will take care of your family. While you are out there, we are motivated to work even harder, to work harder for you, for your families, for this community. So that this island, this nation, that you are putting your life in the line for, that sacrifice is worthwhile,” said Gov. Calvo.

[Deploying Airmen of the 254th SFS pin the yellow ribbon on their family member during a sendoff ceremony conducted at the Guam National Guard Readiness Center in Barrigada. (U.S. National Guard photo by CPT Ken Ola/Released)]

Maj. Gen. Benny M. Paulino, The Adjutant General for the Guam Guard, said in his address, that with this new team deploying, and the infantry battalion still in Afghanistan, the Guam Guard’s operational tempo remains at a high level.

“Today, we remain focused on our soldiers and airmen who are, and will be going, into harm’s way. As long as their boots are still touching the sandy terrain in those countries, we consider our operations tempo to remain at its current high,” said Maj. Gen. Paulino. 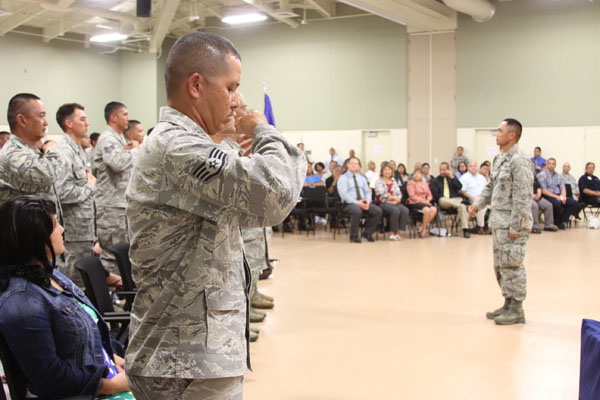 [SSgt Mark Sablan takes out his dog tags in tandem with his fellow deploying Airmen from the 254th SFS, to signify their readiness, during their sendoff ceremony at the Guam National Guard Readiness Center in Barrigada. (U.S. National Guard photo by CPT Ken Ola/Released)]

The Airmen went through pre-deployment training over the last couple of weeks. Training at the Air Force Commando Warrior Training Center at northwest field include mounted patrols, dismounted patrols, collapsible baton skills, law enforcement skills, and weapons qualifications, according to Capt. Alvin Alvarez, who will serve as the 254th SFS team commander during the deployment.

The team is tasked to support the Air Force’s Air and Space Expeditionary Force mission in Southwest Asia. This tasking falls under the Air Force Central Command where the Airmen will be primarily focused on the provision of base defense measures, inclusive of personnel and resource security.

The 254th SFS has deployed several teams over the years in support of OEF with this being their 5th deployment.  Twelve of the Airmen deploying were part of another 254th SFS team involved in the transition of security responsibilities to Iraqi Forces toward the end of Operation Iraqi Freedom.