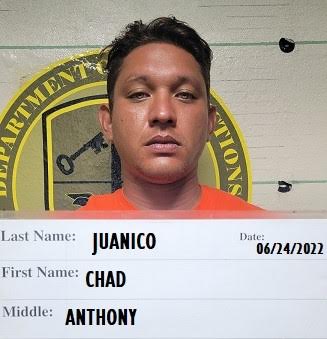 PNC’s Althea Engman also has the report on this story

According to GPD, on June 24th, at around 2:20 am, officers from the Tumon Tamuning Precinct responded to a disturbance call at the Vikings Club in Tumon.

When GPD arrived, at the scene, it was reported that there was a male individual who was “knocked out” bleeding and vomiting just outside the Vikings club.

According to an official magistrate’s report – Officers viewed the security footage outside the lounge and observed that at around 2:15 am. Juanico had struck the sailor, with a closed fist several times, with a few striking contacts in the back of the victim’s head. The Victim then lost his balance and fell to the ground. Moreover, court documents stated that the victim did not retaliate at any point in the footage.

According to GPD – Junico had fled the area in a Kia Sole prior to the officer’s arrival.

Court Documents stated that at around 2:27 a.m, GPD Officers were motoring eastbound on Route 14 and Santos Hill when a dark-colored vehicle matched the description given at the scene. The Officers conducted a traffic stop on the vehicle and observed three individuals occupying the vehicle. The Operator of the vehicle identified himself as “Chad.”
According to the magistrate’s report Juanico had made it difficult for GPD to place him in a police vehicle.

Juanico was arrested for the following offenses, Aggravated Assault, Resisting Arrest, and
Driving while Impaired.

Chad Anthony was processed, booked, and confined at the Department of
Corrections.