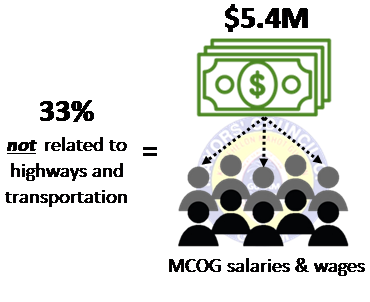 The Office of Public Accountability has released its latest audit of the Guam Highway Fund, showing that 33 percent of the expenditures of GHF are unrelated to highways and transportation.

These include $9.9 million to the Department of Public Works’ (DPW) operation of school buses, highway maintenance, transportation, and public streetlights; $2.6M to the Guam Regional Transit Authority (GRTA); and $1.2M to the Guam Police Department’s (GPD) highway patrol.

GHF is secured for the maintenance and construction of highways and roadways, as well as the implementation of all highway safety plans, programs, and projects.

However, as with prior years, OPA pointed out that a significant portion of GHF expenditures were not related to highways or transportation.

Out of FY 2019’s total expenditures, 33% (or $6.8 million) was unrelated to highways and transportation.

Unrelated expenditures include $5.4 million to Mayors Council of Guam (MCOG) salaries and wages; $1.1 million to the Better Public Service Fund; and $217,000 to Office of Civil Defense contractual services.

In a letter to management, the auditor also noted one instance where a construction project’s retainage was paid before the project’s completion and approval.

According to OPA, management already identified the error and corrected it by offsetting a future payment.