Guam- A family of two adults and four children have been rushed to the hospital after the car they were in crashed into a power pole this afternoon [Thursday].

The female driver and her 4 children were rushed to Naval Hospital, while the father was taken to Guam Memorial Hospital. Balajadia states their injuries appeared serious.

Some witnesses at the accident scene told PNC off camera that the 4 children in the vehicle didn’t appear to be sitting in car seats. They also said one of the victims is a relative of an employee that works at Guam Autospot and that police were reviewing if any footage was captured on the dealership’s camera system.

Southbound lanes were closed temporarily, but police cleared the accident scene just before 4 p.m. this afternoon.

Nursing Supervisor Bill Toves tells PNC they received the father at approximately 4 p.m.. He says the 31 year old is undergoing a diagnostic evaluation and is in stable condition.

Naval Hospital Spokeswoman Jennifer Zingalie said as of 11am Friday, 1 child had been discharged, 3 other children were still stable but their mother remains in guarded condition. The children, 2 boys and 2 girls, are aged 8, 9, 6 and 5. 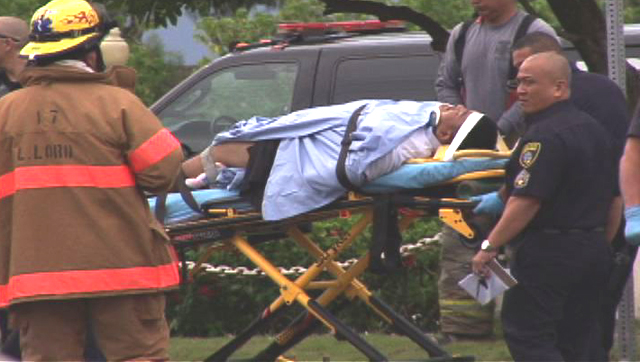