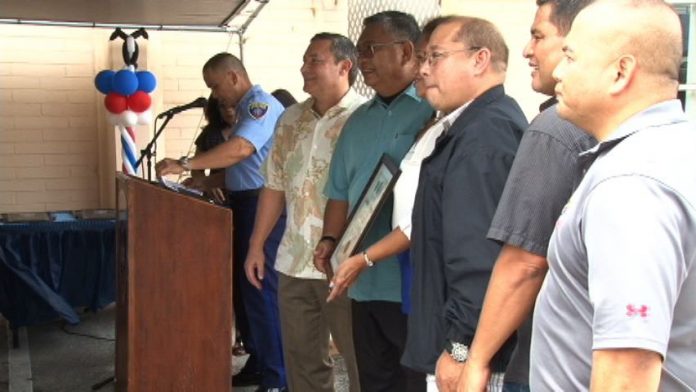 Colonel Ricardo M. Leon Guerrero, Sergeant Peter M. Tydingco, Sergeant Frank N. Corpuz and administrative secretary Gertrudes C. Champaco were all presented with retirement certificates from Governor Eddie Calvo. The four GPD employees were also presented with legislative resolutions congratulating them for their many years of service. Chief of Police Fred Bordallo gave the opening remarks. “A momentous occasion we get a chance to have the honor of recognizing our police employees our civilian staff who like Gerty Champaco who was assigned to the Chief of Police Office and helps us out and worked with different police chiefs was really instrumental in making sure that the office there functioned in terms of it’s administrative functions and making sure that people there had the right communications. And of course Officer Pete Tydingco he came from Tumon precinct. The Tumon precinct has the mission of keeping our tourists and visitors safe. It’s one of the biggest most essential missions of the Guam Police Department and of course our other retirees who we want to honor, Colonel Ricardo Leon Guerrero and my cycle mate Frank Corpuz they’ve served honorably and whenever there’s a chance to say goodbye to them it’s never a permanent goodbye their services in our department will be forever etched in our memories of all the accomplishments that they’ve done,” said Bordallo. The Chief of Police says that this retirement ceremony is a sign that the GPD family is united.