Navy Spokeswoman Coleen San Nicolas Perez says that the girl was pronounced dead at 7:07 am. She says another man involved in the accident was treated and released from Naval Hospital.

The girl’s death marks the 13th traffic fatality on Guam this year.

GMH Nursing Supervisor Josie Zamora says a third injured person from the accident, a 28 year old man, was in critical condition this afternoon on life-support.

The 28 year old man in critical at GMH was driving a 2008 Toyota Yaris north on Route 8 “failed to obey the traffic signal” says Balajadia, and he collided with a 2008 Hyundai Tucson that was trying to turn left onto Route 10.

Balajadia says the girl who died this morning at Naval Hospital was also a passenger in the Yaris and she was found on the floor of the back seat of the vehicle.

The man driving the Tucson was also transported to Naval Hospital, complaining of neck, back and hip pain. But Perez says he was treated and released.

Guam Highway Patrol is investigating the cause of the crash. 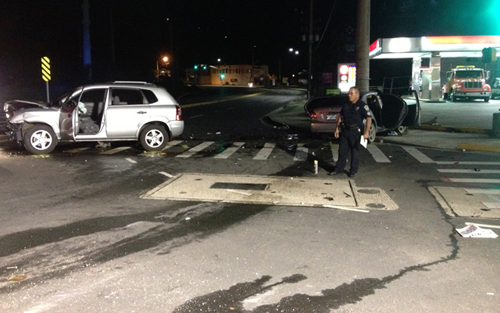 The operator of a 2009 SYM RV 250 Scooter heading south attempted to across over the first of two one lane bridges in Merizo.  Instead of using the two way traffic lane, the operator attempted to drive through the closed southbound lane hitting a concrete roadblock.  It appeared the scooter landed on the operator.  62-year-old Douglas Croy of Yona died of a fracture neck at the Guam Memorial Hospital.  Guam Highway Patrol is investigating the crash.

47 year old Jimena C. Baguyo of  Harmon was killed about 10 pm as she was trying to cross Harmon Loop Toad by the soccer field  and the Harmon Loop Sunset Garden. The 1996 Nissan pickup that hit her fled the scene.  Police later arrested 22 year old Michael Junior Mantanona Meno of  Inarajan who turned himself in. He was arrested for DUI, DUI with Injuries, Vehicular Negligence, expired drivers license, leaving the scene of an accident with injuries, leaving the scene of an accident without providing personal information, and failure to provide assistance.

18 year old Gerald I. Pereira of Astumbo fell from the back of a moving 1992 Toyota pickup with a converted flatbed. The vehicle was being driven by a 17-year-old boy along Kamute Loop in Astumbo Gardens. Pereira was 1 of 4 people in the back of the flat-bed. GPD Officer A.J. Balajadia said that Pereira placed his foot on the exposed tire causing him to be pulled off the bed and onto the pavement. He died 3 days later at GMH from head trauma.

Dolores Leon Guerrero was struck and killed as she was crossing San Vitores Road  shortly before midnight. Leon Guerrero was a resident of  Guama Tran Kila Dot. She was struck by a 2005 Susuki SL Wagon traveling east on Route 14. The driver of the Susuki stopped and provided assistance. No charges were filed against him.

The victim in Sunday afternoon’s fatal traffic accident in Yigo has been identified as 36 year old Rebecca Lynn Duenas San Agustin from Yigo. 7 other people were inured, 5 of them Marines.  The accident occurred about 2:30 pm in the southbound lane of  Route 1 across the street from Our Lady of Lourdes Catholic Church in Yigo. A white 2008 Nissan Sentra and a blue 1993 Chevy Suburban collided. Her death marks the 5th traffic fatality on Guam this year.

43 year old Anna Sterling  of Santa Rita was killed Monday afternoon after the motorcycle she was riding collided with a Toyota sedan in Agat. The collision occurred about 5 pm at the intersection of Route 2 by the 76 gas station. GFD Spokesman Lt. Ed Artero reports that the woman was pinned beneath the vehicle and had to be “extracted.” She was rushed to Naval Hospital and CPR was performed on her en-route. Navy Spokesman Lt. Knight William Knight Hospital says the woman was pronounced dead shortly after arrival. Her death marks the 6th fatal traffic related fatality on Guam this year.

28 year old Monetn Peter is dead after being ejected from his pickup which then rolled over on top of him. The accident happened early Friday morning, shortly after midnight, along the back road to Andersen by Chalan Momi Street in Yigo. Guam Police Spokesman Officer A.J. Balajadia reports the victim was driving a Nissan Pathfinder north on Route 15 towards the back gate of Andersen Air Force Base when he lost control of his vehicle and ran off the roadway.  He was ejected from the Pathfinder and its subsequently rolled over on him, says Officer Balajadia. GFD rescue units responded. Medic 10 rushed the man to GMH where Nursing Supervisor Maria Mafnas says he was dead on arrival.

8. Sunday September 9, Airport Road, Route 10A, 8:25am, auto-pole:
A 52 year old man is dead after his Toyota Corolla slammed into a power pole on Airport Road this morning [Sunday].The death is the 8th traffic fatality of the year on Guam’s roads. It happened just short of the airport entrance traffic light on Route 10A. The Toyota Corolla was traveling  west on Route 10A towards Home Depot when it crossed the median and ran up the curb into the power pole. The vehicle struck the pole on the front left driver’s side. Air bags deployed, the front windshield was still intact. Guam Fire Department Spokesman Lt. Ed Artero says the 911 call came in at 8:25 am. CPR was being performed en-route to the hospital. GMH Nursing Supervisor Sally Quichocho told PNC News that the man was pronounced dead at 9:02 am.  51 Year Old Bernard Keith Lewis Dies After His Car Hits Street Light Pole on Airport Road. died of natural causes.

9. Monday September 21, Route 1 at Y-Sengsong Rd, Dededo.
48 year old Adolph Miller was riding his moped when he collided with a Dodge Nitro on Route 1 at Y-Sengsong Drive in Dededo about 9:30 Monday morning. The driver of the vehicle, who did not want to be identified, told PNC News that he was traveling south on the inner lane along Marine Corp Drive when the rider of the moped slammed into his car. He said the moped was making a right turn heading south onto Marine Corp Drive coming from Y-Sengsong Road, when the collision occurred. The rider of the moped then skidded across the road about 30 feet. The Nitro driver says he stopped his car and immediately went to the rider of the moped to see if he was alright. He adds the man was conscious but his injuries appeared serious and he wasn’t moving.  Police who were at the scene said Miller was not wearing a helmet.

10.  Wednesday, September 26; auto-ped, 7pm Route 3 Dededo.
A 75 year old man on foot was struck and killed Wednesday night near the entrance to the Naval Communications Station in Dededo. He was identified as Jose T. Cabrera of Dededo. It happened around 7 pm on Route 3, north of Fern Terrace. Cabrera was reportedly lying on the road when a man driving a 2010 Toyota Corolla ran over him.

11. Wedensday October 17, 2 am, Route 16, Dededo. motorcycle spill
The owner of Guam’s Harley Davidson store, Bill Neilsen, was killed after he lost control of his motorcycle and crashed in Dededo at 2 am. GMH Nursing Supervisor Shirley Pinera says the 67 year old Neilsen was pronounced dead at 3 am at Guam Memorial Hospital. Neilsen was a resident of Latte Heights. Neilsen was apparently trying to make a right turn from Route 16 onto Alageta Road when he struck the median, lost control of his 2007 Harley Davidson motorcycle and fell with his bike to the pavement.

A man driving a 2008 Toyota Yaris north on Route 8 “failed to obey the traffic signal” says Balajadia, and he collided with a 2008 Hyundai Tucson that was trying to turn left onto Route 10. The man driving the Yaris was taken to GMH with possible internal injuries. The girl was found on the floorboard behind the rear passenger seat of the Yaris. Again, she was pronounced dead at Naval Hospital this morning.