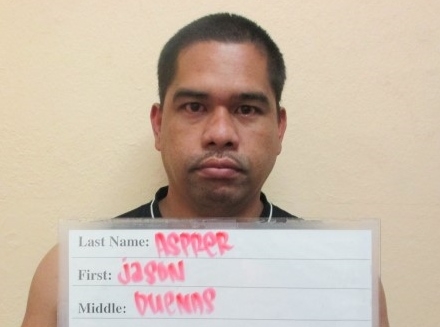 Guam – A 40-year-old man is behind bars after he allegedly sexually molested a 17-year-old minor boy who has a developmental disability and forcing the minor to smoke “ice.”

The magistrate complaint states that family members told police that the 17-year-old male has the mental capacity of a sixth grader.

Police say it all happened midnight last Thursday when Asprer picked up the victim from home and took him back to his residence. The victim told police that while there, Asprer forced him to smoke methamphetamine or the drug “ice.”

After the victim reluctantly took a few puffs, he says that’s when Asprer forcefully removed the 17-year-old’s pants and began to sexually assault him.

The victim told police that Asprer eventually agreed to stop and to take him back home.

Asprer was eventually located at his residence where police found methamphetamine and various drug paraphernalia.

“The items were positioned in such a way that it appeared they were being prepared for street level distribution,” the complaint reads.