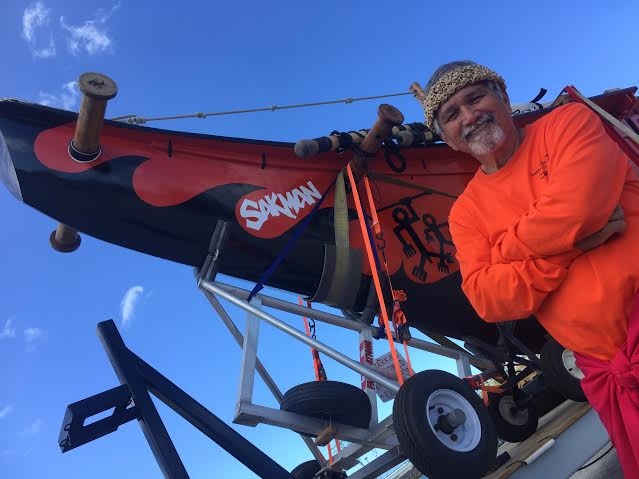 The Sakman traditional Chamoru canoe was carved in San Diego by the Chelu group and master carver Mario Borja.

Guam – The Chelu group out of San Diego has shipped their 47 foot 3 foot wide traditional Chamoru Canoe called a Sakman to Guam for the upcoming Festival of Pacific Arts (FESTPAC) in May.

The Sakman made it to the Agana boat basin from San Diego, California thanks to the help of the Matson Navigation shipping company. The canoe was built by the Chelu group. Master Carver Mario Borja says the journey actually began back in 1995 in San
Diego. “It began when we heard about the arrival of Hokulea a Hawaiian double hull canoe we prepared to greet that canoe by building a twelve foot galaide,” said Borja. Borja says they were shocked to see that the 67 foot Hokulea was much larger than the galaide they had built. That’s when Borja and other members of the Chelu group began to do research, with the help of the late Carlos Pangelinan Taitano, on the traditional Chamoru canoes that were used until the Spanish stopped Chamoru canoe building during their colonization of the Marianas.

What they found was that there were various sizes of canoes the largest was called a Sakman. A British sailor named George Anson commander of the centurion captured a canoe in 1742 and had his draftsman prepare a diagram of the canoe. That diagram is the basis of construction for this Sakman from a 125 foot redwood log.

“In anticipation of building the large one we built small canoes many small canoes so we could build up our confidence and learn the mathematics involved and also learn the tooling required and the craftsmanship needed,” said Borja.

With a group of what Borja calls “misfits” of various trades it took a year to build this Sakman. “It was just the right mix of different backgrounds that made it happen,” said Borja.

Once it was finished in March of 2011 they had to learn how to sail it. They weren’t sure how well it would perform but they soon found out that the ancient design of their ancestors held true to this day. “When we first took it out it amazed us and our pride grew from maybe a minus five percent to a hundred thousand percent. We were so proud that here we were a bunch of misfits were able to build a canoe and it was really a work of many hands many hearts and one spirit…one spirit,” said Borja.

The canoe builder says they’ve hit 15 knots with training sails but now with a larger sail he believes they can hit up to 21 knots or 23 mph on land. “At about 8.5 knots it starts to hydroplane and I’ll tell you when it starts to do that you could feel the adrenaline flowing because it wants to kind of fly you know…the flying proa it wants to jump out of the water,” said Borja.

The canoe weighs 56 hundred pounds but it can float in 18 inches of water or 24 inches of water when fully loaded. “Despite what the colonial period tried to do to the seafaring culture of our island the presence of this canoe is testimony to that resolve that we are slowly but very surely recuperating and we will muster the energy and the resources of the land to bring back our seafaring culture indeed,” said Borja.

The master carver says that this canoe has inspired various native American groups in California to begin reviving their traditional sailing methods.