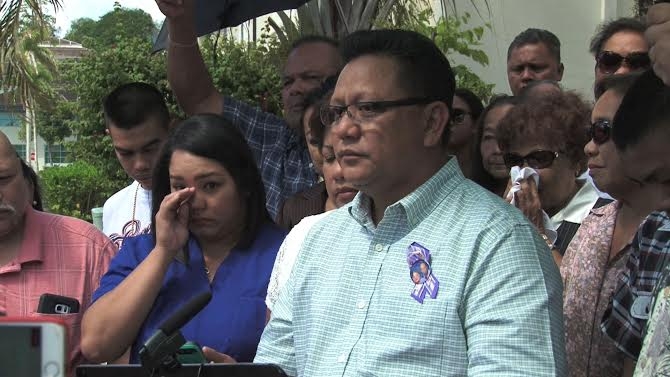 Roland Paul Lizama Sondia says Archbishop Anthony Apuron molested him when he was an altar boy in Agat.

Guam – Yet another victim has come forward with sex abuse claims against Archbishop Anthony Apuron. Roland Paul Lizama Sondia says he was molested by Archbishop Apuron in 1977.

Sondia is now the fourth victim to publicly accuse the archbishop of sexual assault.

Like the three other alleged victims, Sondia says it happened at the rectory of the Our Lady of Mt. Carmel Church in Agat. Sondia was 15 years old in the summer of 1977 and one night he and a few other altar servers were sleeping over at the rectory.

“I was awakened when I felt someone tapping on my shoulder and calling my name,” says Sondia. “I looked up and it was Father Anthony Apuron.”

“He put his right arm around my shoulders and pulled me closer saying, ‘Do you want to try me?'” recalls Sondia. “Before I could do anything he started rubbing my privates. I loudly asked him, ‘What are you doing?’ I told him to stop but he didn’t. Instead he continued on and this time squeezing my penis and kept saying, ‘Just try me.'”

Sondia says he eventually managed to break free and run toward the door.

“I remember glancing back and he was just sitting there at the edge of his bed with his head down,” says Sondia.

He eventually made his way home, but says with everyone asleep, he had no one to share his horrific experience with.

He adds: “I was in shock. I was confused, offended, humiliated and disappointed that the man I looked up to had just asked me if I wanted to have sex with him.”

We asked him if his goal was for Archbishop Apuron to be removed.

“I want him first to acknowledge what he did, admit, then resign.”

PNC: “Any criminal actions that you might be seeking or any legal actions at this point?

“Not at this point,” Sondia says.

After Sondia spoke, several of his family members also came forward to voice their support for their loved one.

Sharleen Santos-Bamba, a relative of Quintanilla, then called on the Archdiocese to act immediately.

“Each day that goes by and these victims’ allegations are ignored is another day that they are victimized,” she proclaimed.

We also heard from Attorney David Lujan, who is now representing three of the four sex abuse victims. Since the allegations have come to light, Archbishop Apuron has only responded to two of the alleged victims, Quintanilla and Concepcion. He has not released a statement regarding Walter Denton’s claims of rape.

“I am not surprised by Archbishop Apuron’s total silence regarding Walter Denton,” says Lujan. “In fact his silence is really deafening and in my opinion it is an admission of guilt.”

Attorney Lujan says he’s working with two more victims, one of whom, he says will be going public very soon.